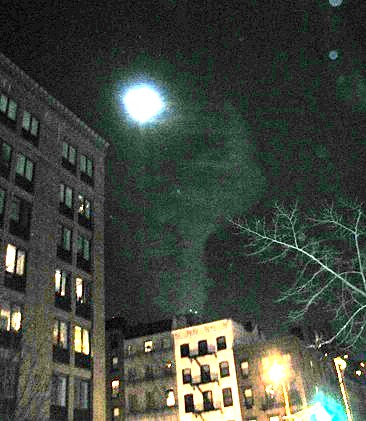 I took this picture coming home from the gallery last night. I was trying to capture the mushroom-like cloud beneath the moon, and I had to use so much image correction to make it visible this photograph looks more like a painting. Not a bad effect, really. I think.

The title of this post refers to this NPR piece I have been working on for more than a year.  It’s just been so tricky.  My producer suggested a new way to go, which sounded like it might finally be the way that would work, but I was afraid to start.  What if it didn’t?  I didn’t think I could take yet another version that wasn’t good enough.

So I’ve been putting it off, and putting it off, which of course triggered a growing feeling of self-loathing.  I finally forced myself to start earlier in the week and I felt light as a feather for the rest of the day.  I did it!  I started!  Then fear set back in the next morning, which led to more postponement and even greater self-loathing.

Until now.  I plowed through and finished a first draft of the new version.  It’s official: I do not suck.  Today, that is.  I’m safe for today.

Venturing Outside My Small World

One thought on “The Sweet, Sweet Joy of Progress”