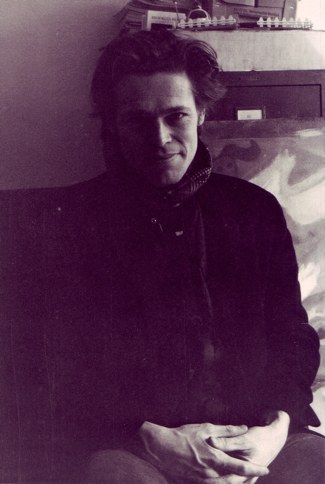 This is why I am not a working photojournalist today. I had a couple of great opportunities to break into the business which I completely and totally blew. My friend Aly (the one who just died) was working—now I forget where, as a stringer for Reuters I think, but he brought me along on a couple of interviews to take photographs and in both cases the pictures did not come out.

I was trying to be creative and I should have just taken the 35mm, but, well, yeah. They were so under-exposed in both cases they were unusable and that was the end of my career.  I took a shot that didn’t pan out.  Can’t win them all. Sigh.

This picture was taken just before Willem Dafoe became famous nationally.  I was blown away by how handsome he was, and how charismatic.  I asked him to turn to the camera so I could get this shot and I just froze.  It wasn’t me! Okay it was me, but he was that good looking. I just wanted to … look at him!

I got another chance with Ruben Blades. Aly was so kind to give me another chance. And I blew it AGAIN.  It’s fine.  If it was something I really wanted I would have kept trying.

Virus and the City: Supplies

2 thoughts on “More Pictures From My Sordid Past”