I’ve got “et vitam venturi saeculi” (and the Life of the world to come) in my head.  Over and over. HA!!  I just read this in Wikipedia.  It’s not just me:  “Most notable about the movement, though, is the closing fugue on “et vitam venturi” that includes one of the most difficult passages in the choral repertoire, when the subject returns at doubled tempo for a thrilling conclusion.”

I would change that to read, “one of the most difficult passages in the choral repertoire, and so that part is usually sung by robots.  Or aliens.”

But when I read this my response was, oh yeah??  You won’t kick our asses Beethoven:

“Compared to other works of similar stature, the Missa solemnis is rarely performed. Its notoriously difficult choral parts make it a stumbling block for many orchestras who only have access to volunteer choirs. Limited performances of the work have made the work far less known than Beethoven’s other large works.”

This was the tour group I had to maneuver around yesterday.  We get a lot of tour groups in our neighborhood.  I like that people like to visit and explore, but, well, I’m human. Sometimes I feel cranky about it.  Not yesterday.  Plus they all kept to the right so I could shoot around them easily.  When I think about though, what is my problem?  Sometimes I get delayed all of ten or fifteen seconds?  This was a small tour group.  The Sex and the City tours are bigger. Long, long lines of women holding cupcakes that they just bought from Magnolia.  But I cut the Sex and the City tours a lot of slack, because I love Sex and the City and feel a solidarity with the women in line. 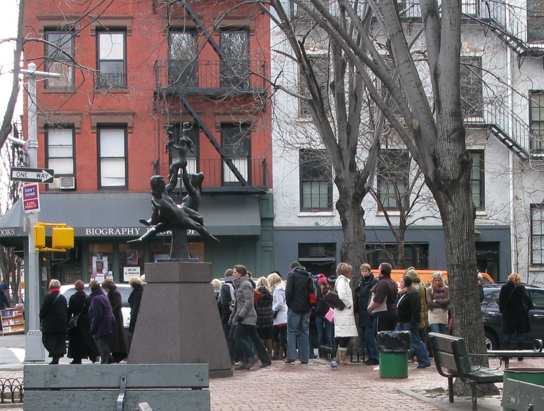 Virus and the City: Getting Out

I’m a Staff Pick in Denver!!