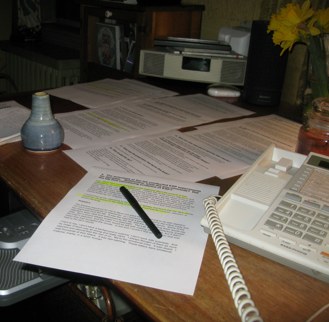 8:42am.  Just finished my second interview of the day.  It was only ten minutes long so it was short and painless.

Before that I was on the Coast to Coast AM with George Noory from 2 – 5am. That was a pleasure, and he was a great host, but I have no idea how well I did. As per usual, sometimes my mind would just blank and I couldn’t access information I know I have in my brain, and I’m afraid I sometimes rambled. The picture on my desk are the notes that I had planned to refer to, but the few times I tried I couldn’t find the ones I needed so I gave up.  (I took that while I was on hold, so that’s a live, as it was happening show!)

One caller asked me a particularly sad question and I did my best to give her a real and compassionate answer.  I’m afraid to go back and listen to what I said.  I really wanted to give her an answer that might give her some peace.  But maybe I rambled there, too.

I’ve gotten some nice email about the show, but then I also found a website where the people were live-chatting about it and they wondered why I was even on.  They said I was just flogging my book, something I tried not to do.  I tried to focus on the work of the lab, and how cool it was, and I probably did talk a lot about the parts of the research I liked best.  Ugh. Can’t win. It’s not easy, people!!

I’m doing a reading in Boston this week. I am looking forward to that, being in Boston. Not the terrifying getting up and talking in front of people part, just being back in a place where I once lived.

Old Navy is under siege!!

7 thoughts on “My Insane Week Has Begun”