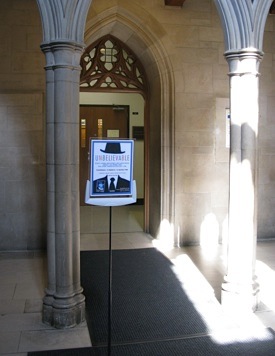 It made me so proud to return to Duke and see this sign for my book at the entrance to Special Collections, where I spent my days researching the Parapsychology Lab archives.  Sigh. Accomplishment. Feels good.

My downstairs neighbors at my hotel complained about me last night.  I was making too much noise, they said.  I guess I greatly under-estimate my size and weight!  I was exercising, which did include some jumping around, and apparently I’m not as light as a feather, which I actually believed. Until last night.  Thank you very much downstairs people.  Sigh. Disillusionment.  Doesn’t feel so bad, actually.

I guess there’s something to that Buddhist thing of not getting too attached to your feelings and making such a big thing about them.  They are so transitory. Feeling bad?  Hang in there, that will change.  But of course that means if you’re feeling great that won’t last either!  It’s like that fable I posted.  This was the version that was told on the show Northern Exposure:

Just another way of saying don’t get too attached to your feelings.  What seems like a bad thing today, something to get depressed about, might end up being the best thing that ever happened to you.

2 thoughts on “Good Morning from Durham”