For real!!  I went with Dimitra, Barbara and Lily to see Hair and at the end anyone who wants to can get on stage and sing Let the Sun Shine In so I did!  It felt so great, I can’t tell you.  I had started tearing up and crying just before too, because I had flashed back to those days, and I remembered exactly how I felt, the joy, the expectation of life, the fear because of Vietnam, and I remembered what I was thinking then, and I was half sad because it’s over and gone, a certain youth and innocence is just over.  Done.  That’s it.  Not coming back.  But I was also half not sad because I’m not dead yet and certain feelings can be reawakened at any time and here I was with friends having a fabulous time.  And then seconds later they’re urging us to get on stage and sing and there just wasn’t a chance in the world that I wouldn’t get down there (we were on the mezzanine).  I danced, I sang, and man this would be such a fun way to make a living.  I can’t believe some people get to do this every day.

I can’t urge everyone enough to see this. The cast is just so talented and charismatic. You won’t believe their voices!  They’re all so cute and charming and they constantly go out into the audience to sing and interact and it just raises the energy level and the joy for the audience. Go, go, go.  And if you do go, don’t pass up the opportunity to go down on the stage and sing.

Update: Found a video of the cast on Conan the night before which captures the fun!

This is 42nd Street and there was a long line of kids camped out on the street waiting to see the new Harry Potter movie. 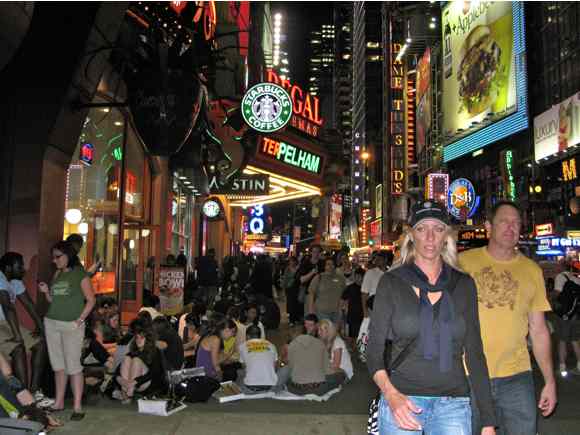 7 thoughts on “I Sang and Danced on Broadway Last Night!!”