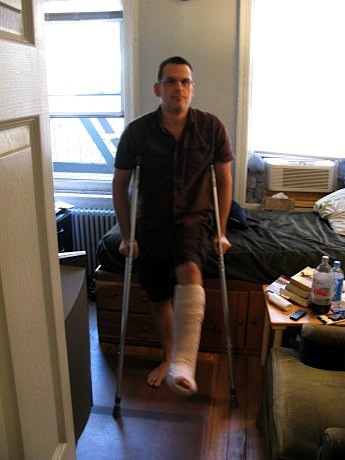 My friend Howard had an operation on his foot. He’s out of commission for three months.

Hey. Now’s the time to steal his stuff.

And leave him with no food.

Getting warmed up now: we could also hide the remote, remove all toilet paper. And books. Oh God, we could release ticks that would make their way inside the cast. ACK. I can’t believe I thought of that. We’ll have to install a webcam to watch the result of that, though.

Hey Howard, I’m going to walk today. Right now I am jumping up and down, alternating the foot I land on.

Okay, I’m done. Today is a day off for me. I’m going to catch up on my People magazines, and TV, and eat cheese and bread all day.

I feel a little guilty because this weekend is open house weekend, which I didn’t know until today. But a bunch of places in all boroughs open up for tours, some not so interesting because you can go there anytime, but some are more inviting either because they aren’t open for visitors usually, or I’d never known about them before, or they have someone knowledgeable giving a tour, and so on.

I Deserve a Pedicure