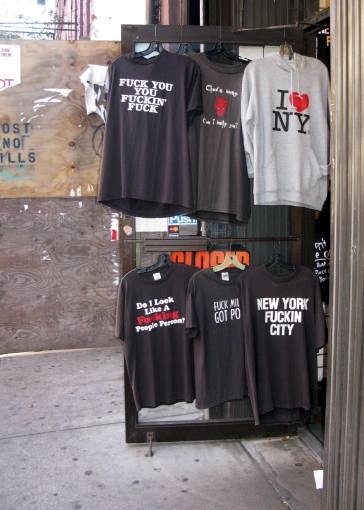 In the days following 9/11 when we stood along the highway holding up thank you signs for the rescue workers, my friend Anne wore a tshirt that read “New York Fucking City.” I was so proud. It was like saying to the terrorists, “Fuck you. We’re still here.”

I’ve always loved New York’s edge, that we talk like that. It pissed me off when my book “The Restless Sleep” came out and all these people said I was trying to sound like a cop because I said fuck a lot. Hello?? No! I talk like that!! Really! I was writing exactly how I talk. My singing proposal has the word fuck six times on the first page.

Except I’m probably going to take that out. First, I don’t think people “hear” the word the way we say it. And second, we don’t really talk like that anymore. New York, well Manhattan anyway, has gotten so homogenized. I don’t want to get into a whole thing about the New York of my youth that is gone, gone, gone, it’s boring, I know.

I just wanted to explain why I took this picture. I saw these tshirts and thought, ‘We’re not that city anymore.’

3 thoughts on “We’ve Lost Our Edge”