There was a murder that I mentioned very briefly in The Restless Sleep that I never forgot. I chose not to research it for various reasons, but I’ve decided to make it an ongoing project now. I’m pretty sure I’ve posted about here before. I’m going to find out what I can about the victim, and I’m also going to see if I can track down her family (or rather, the descendants of her family). Maybe I should call this project Resurrecting Ream Constance Hoxie/Hoxsie. Her name was often misspelled as Hoxsie so I’m always going to include both (for search reasons). Here’s what little I know.

Ream was murdered in her home on West 89th Street on a Monday, February 2, 1920, somewhere between 3 and 3:30 in the afternoon. She was only 17 years old. She was hit in the head with a hammer seven times, shattering her skull. It must have been pretty bad. The detectives in their notes repeatedly refer to the savagery of it and 1920 was a brutal year. 215 people were murdered that year in New York and another 38 were killed in a bombing on Wall Street. (People have been trying to blow up New York and New Yorkers for a long time.)

The killer then dragged Ream across the floor, flung her on the bed, and raised her dress and lowered her under garments. The police reports do not say what happened next, except that there may be evidence that she was “mistreated.” (Like bashing her skull in wasn’t proof that she’d been mistreated already.)

The only suspect was a thin, dark haired, 35 year old man who had answered an ad for a room. Ream’s father and step-mother rented rooms in the building. In fact, Ream was found by one of the roomers, a teacher named Sarah Reeves. Ream’s step-mother, a performer, was in New Orleans at the time, and her father, an auto mechanic, was at work in Queens. Miss Reeves found Ream in a darkened room, kneeling before the bed, her upper body resting on the mattress. I guess resting in not the right word. This man had knocked on the door 3pm. Ream didn’t answer, but a janitress who worked in the building let him in.

This is a picture of the hallway leading up to the room where Ream was found. (More below.) 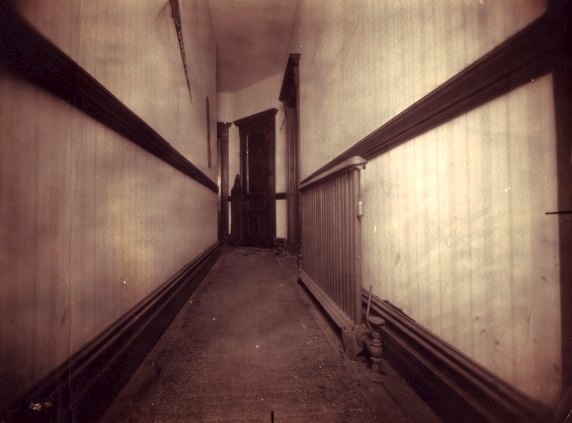 I debated about whether or not to post about this here or on my Restless Sleep blog. I decided the Restless Sleep people might not be interested in the ongoing search aspect of it. So I’ll post the results there when I have them, and post about the hunt here.

Should I cut my hair short?