Well, I just had a completely different conversation with the vet. Buddy is not eating and I called to make sure there wasn’t something else I could give him to make him eat and the vet said when he opened him up he found lymph nodes the size of ping pong balls. He didn’t tell me that before. In this conversation he was definitely preparing me for the worst. Like, even if he has lymphoma it might not be treatable.

I bought tuna and butter to try to feed him, but I’m going to leave him alone for the night and try in the morning. He wouldn’t eat babyfood just now, which I had warmed in the microwave, and he just went to hide in the kitchen cabinet. I know what hiding is about. Although I will give him his antibiotic and painkiller a little later.

I used to think of myself as strong but I don’t think so anymore. I know so. This is Buddy when I got him. I didn’t have a camera in those days. I took this with a disposable camera, so it’s not a great shot. 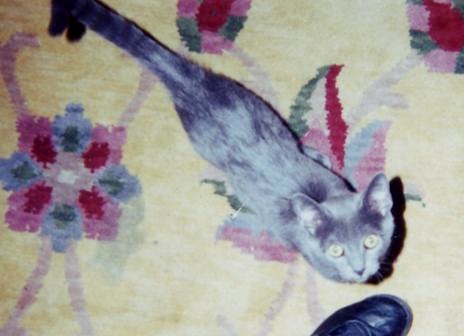 Christmas in the West Village, 2017

5 thoughts on “A Different Story”