Things are improving at Casa Crazy Cat Lady. A few hours after fluids and a Pepcid (and about a thousand other drugs) Buddy drank water on his own. A few hours after that he ate babyfood. He hasn’t voluntarily done that in three days, so there was much rejoicing over here. “Who’s the greatest eating cat in the whole wide world? You are!”

When he was done he was curling up and begging for pets and I spent a few hours with him back in the bedroom, where he insisted we be. I watched tv on the inferior tv (the good tv is in the livingoom) and he was purring, purring, purring.

I almost don’t want to give him his tramadol, the pain killer, because he will be out of it, and he seems so much better. But cats tend to hide discomfort, and he just had abdominal surgery on Wednesday and he does have lymphoma, so he must be uncomfortable.

Here he is right now, taking his post breakfast nap on the couch, on the comforter I spread out for him. I have to go out and run errands so I’ll take pictures of something other than my sick cat. 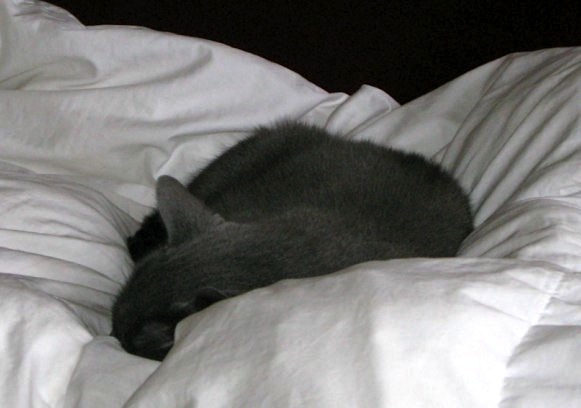 Thank you Sara McKay and the Saint Peter Choral Society!