I paid a big chunk of bills, after deciding I could afford to, and then one thing after another went wrong, all of which will cost $$$ and I’m like WTF?? This is because of my pope post, isn’t it??

This week is my last week of being a Census clerk, but I might go on to be a re-enumerator. That’s the person who goes to the houses of people who filled their forms out incorrectly. (Versus the enumerator, who goes to your house if you don’t fill it out at all).

This was my set-up at the Greenwich House, a senior center. Every set up is different. Basically the Census Bureau went all over NY arranging for places for people like me to be available to answer questions. So you get there and sometimes they put you in a corner in a dark hallway somewhere, sometimes you get a table and a chair, as I did here. I was treated very nicely wherever I went, though.

I’m supposed to be at St. Veronica’s right now, but I’ve been setting up outside the church instead of inside in order to reach more people and I’m waiting for it to warm up more. The church is in the shade now, and a block away from the river and it would be FREEZING. I could go and set up inside, but the church is not active at these hours and I’d feel like I was taking the government’s money for nothing. 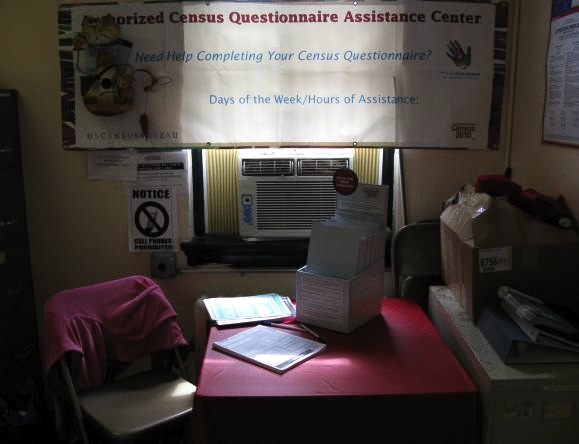 Another House I Can’t Possess