Each chapter of my new book is going to feature a piece of music. I’ve mostly decided which pieces I’m going to do, but every now and again a piece will pop up while I’m listening to my ipod, like the Brahms motet titled Wo ist ein so herrlich Volk, and I think, I should get lost in this one for a while.

Brahms wasn’t wild about this piece, I just read. WTF? I just flashed on a scene from when I was 12 years old. A friend of mine was saying how she liked this other friend of mine. I had to tell her that this other friend didn’t like her. “Do you still like her now,” I asked. “Well,” she answered, “it’s hard to continue to like someone when you hear that they don’t like you.” It was so honest and vulnerable at a time when we were all so careful to be anything but.

This motet is from a series of three, and maybe Brahms didn’t think the other two were the best things he’s ever done, but he must have liked this sweet little jewel of a motet. I can’t find a good version to point you too. The ones I’ve found are all performed so fast and clunkily. That isn’t a word I see. Clunk-like? The beauty is lost when it’s done this way.

This picture is from fashion week. These people were waiting to get into Abercrombie & Fitch. All I could think was “bed bugs.” (They had to close down to deal with a bed bug infestation. Does everyone know we’re being over-run by bedbugs here in New York?) 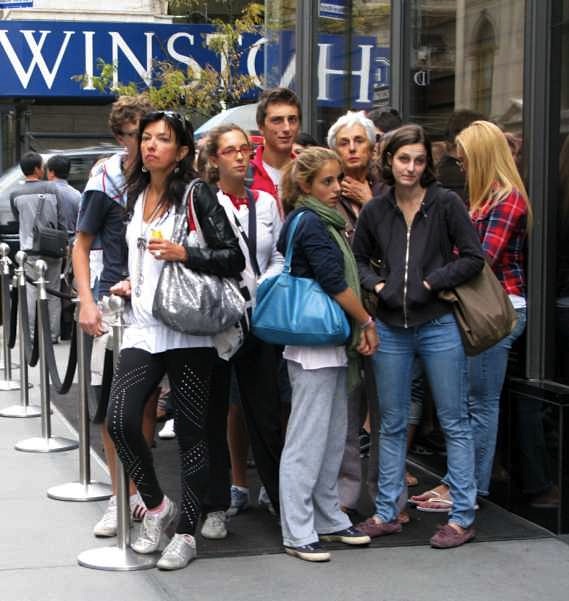 Preparing for the March on Saturday

2 thoughts on “I get to Wallow”