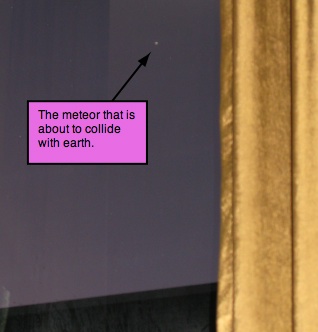 Ah, it would be nice to be educated. Because then I would know what this is. There’s something very bright in the sky right now, in a spot where I’ve never seen anything like that. Or rather, not this time of day. It’s probably a planet. OR, a planet eater! Orrrrrrrr my ride home.

I have to run! I’ve taken a freelance job fact-checking a friend’s book (yay!) but that means I only have a couple of hours a day to work on my own, which will be the first few hours of the morning, always my best writing time.

In the meantime, a reprise of a post from two years ago where I listed some of my favorite Christmas episodes. I’m going to add to it tomorrow, but if you have favorites, let me know! Maybe there are good ones I’ve forgotten, or even better, good ones I’ve never seen.

West Wing: Noel. This is the best of them all, my personal favorite, it’s the one where Leo tells the story to Josh that begins, “A man falls into a hole â€¦”

Bones: The Man in the Fallout Shelter, this is the one where they are all quarantined in the lab over Christmas.

Buffy the Vampire Slayer: Amends. The one where it snows at the end.

Roswell: A Roswell Christmas Carol. This is the one where Max heals all the children at the hospital.

Basking in a Lazy Sunday