The Harvard Glee Club performed last night at Grace Church. If I didn’t have a cat on me I’d run and grab the program to list my favorite pieces. I remember one was a Bruckner, and another was a Leonard Bernstein piece about the lonely men of Harvard, which he wrote while a student. He was briefly the accompanist for the Glee Club, but was fired after four weeks. Imagine!

At the end they invited all the Harvard Glee Club alumni in the audience to join them to sing Harvard football fight songs. Men of all ages came up out of the audience. I almost cried, there was something very sweet about it. During one song there was a call and answer thing, the men would sing something and women in the audience would call out “Radcliffe, Radcliffe.” I remembered when I worked for Harvard after graduating (from Tufts) I envied the strong community they had, and I felt it last night. It was really nice.

Anyway, I tried three different settings on my camera and none worked. This was the best of the lot, but everyone has these light reflecting devil eyes thing. This was at the end, when the alumni joined them. 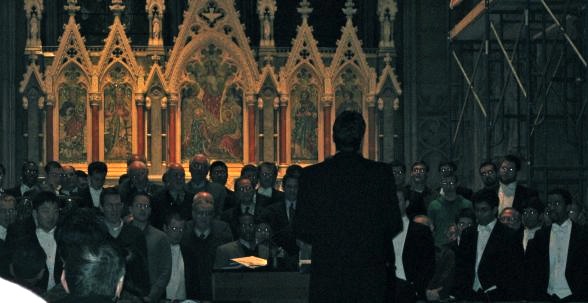 One of Us is Working Today