My friend Marisa and I went to the Met yesterday to see an exhibit of night photography. My three favorites were Robert Adams, Stephen Tourlentes, and Hiroshi Sugimoto.

Their work was on a wall together, three in a row, and those three photographs were the ones that grabbed me. Before heading up there I was transcribing my interview with composer Morten Lauridsen, the part where he was talking about trying to make music that takes you to a place where there are no words, and that’s how I would describe the work of these three photographers.

The Hiroshi Sugimoto photograph of the sea I had to get up close and spend some time with, but it was like being hypnotized. The work of the other two (I’ve also been browsing their websites) was so expressive they’re almost painful, I think I have to say Robert Adams especially. If I was going to go for a life of crime I’d steal his pictures first, definitely evocative of something that I’d like to have around always. Update: I’ve been browsing some more and now Adams and Tourlentes are tied for which photographs I’d steal first. I’m going to need a partner.

The Alexander McQueen exhibit was INSANE. We decided we’d come back during the day when everyone else is at work.

A bike accident that I passed by on my way to the museum. 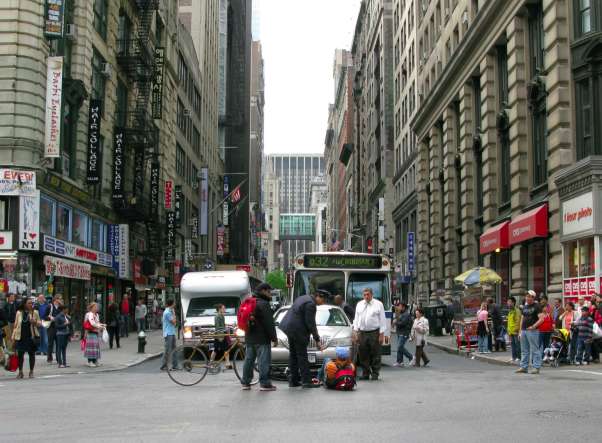 OMG! I went to a party that was talked about on Page Six!