I was afraid the Wild Bird Fund people were going to tell me my bird was fine and I should have left him where he was so his mother could find him. That didn’t turn out to be the case. I’m not happy that he is not fine, but I did the right thing and he’s going to get great care now.

He’s about 14 weeks old I learned, and the vet showed me the xrays where he has a broken leg AND a broken wing. Poor little guy. I could see she was debating what to do. I’d been told they’d splint him up and I’d have to take him home, but she ultimately said, “He needs to stay here. We can manage his pain and feed him, he needs about a week.” Then I have to take him home and get him ready to be released, except she said they may just turn him over to the group that does the re-homing, I’m supposed to call back in a week to find out. She said the wing was broken in a spot where he’d be able to fly again.

I miss him already, and I may never see him again. This is Finney demonstrating why I never could have kept him anyway, it’s for the best. Thank you Wild Bird Fund for taking him and helping him. 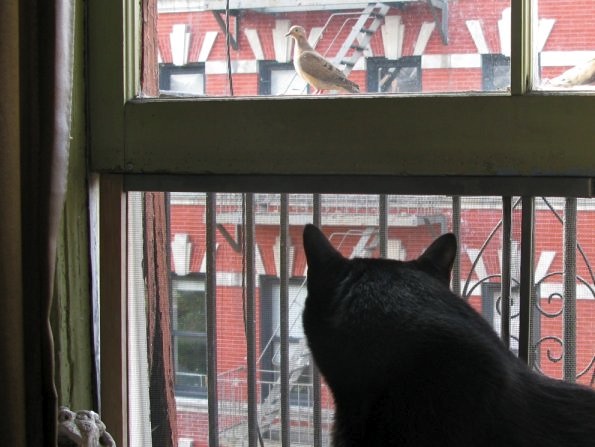 My Next Book – Blackwell’s Island

9 thoughts on “I Miss My Bird, but Thank You Wild Bird Fund”