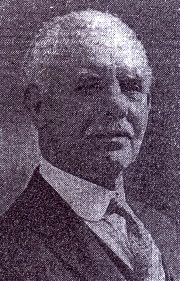 I don’t really need to go, but I’ve been researching coal mining and Gwilym Amos and the Orpheus Glee Club (now called the Orpheus Choral Society) and now I’m just curious to go to the place I’ve been immersed in for months. The mines are gone, but there are remnants. There’s also the Luzerne County Historical Society and the Anthracite Heritage Museum, and maybe I can uncover some more information. It’s just a little over three hours away.

If nothing else, maybe I can get a hold of a better picture of Gwilym Amos. This is a copy of a printout from a microfilm reel of a Welsh newspaper called The Druid (year 1924). He has descendants. Maybe they have something they’d be willing to let me scan.

“I cried many times. I’m still crying. I had a very hard life.” That’s from Growing up in Coal Country by Susan Campbell Bartoletti. I think Gwilym had a nice life though, mostly. His father on the other hand, not so much. According to Anthony Brooks, the Executive Director of the Luzerne County Historical Society, it took only a generation for the Welsh to get out of the mines.

So while William Amos may have been crying right until the very end, his son was probably singing.

The Music in My Book and Victoria’s Agnus Dei II