One of my first jobs was at a Woolworth’s. I was 17 years old and a Christmas temp, but I didn’t work on the floor. My job was assessing people’s applications for credit and deciding if they should get coupons or not. This was what they gave at the time instead of a credit card, but they were essentially the same thing. I can’t believe they gave that job to a 17 year old. I felt mortified every time an adult came to me to apply for credit. People in their 20’s or 50’s, etc., had to sit and wait to have their finances evaluated by a teenager.

According to the guidelines I was given practically everyone was eligible. But I did the math and it wasn’t a great bargain. The interest rates were high and the people who could least afford it would end up paying a lot of money for a small amount of credit.

I tried quietly explaining this to everyone who applied, (without my boss seeing) but every single person went for the coupons regardless. Finally one woman looked at me and said in tears, “I have to buy Christmas presents for my children. This is the only way I can do it.” I felt like such an idiot. I come from a relatively privileged background. I was aware that the applicants were struggling financially of course, which was why I was trying to steer them away from digging this hole for themselves. And for what, I remember stupidly, cluelessly thinking. For the kinds of things you can buy at a Woolworths? I hadn’t stopped to think why someone would go for them anyway, why they would need to go for them anyway.

I approved everyone (who was eligible) without a word after that.

I bring this up because I’ve read so many tweets and articles basically sneering at the people lining up for these holiday sales. Yes, some of those shoppers lack imagination for what they might do with a Friday, and some are shopaholics or hoarders or insane (the woman pepper spraying people to get them out of her way). But some of them are mothers who are struggling to buy their children Christmas presents. Or things they need. Or maybe something completely frivolous, because it’s hard to live on nothing but the bare necessities all the time.

Yes, I’m doubly sensitive about this these days because I’m on a tight budget myself. In fact, I think the only thing keeping me off those lines yesterday is the fact that I don’t have children!

So I feel lucky that this is what I got to do yesterday. My friends Ellen and Giovanni hosted a music party. Everyone had to bring two Brazilian songs and I was introduced to all this music I probably never would have heard otherwise, it was great. (That’s Giovanni and Ellen on the left, and some of the guests.) 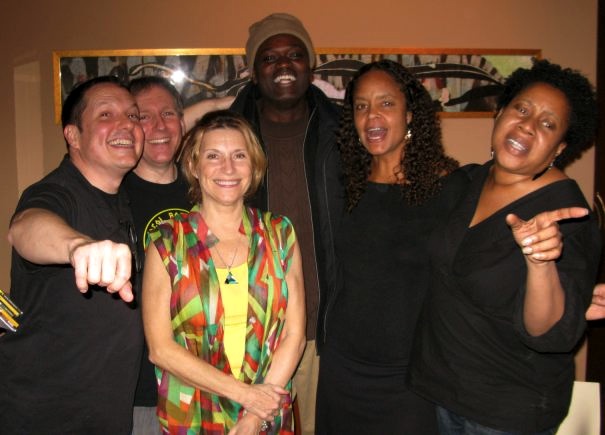