Every Tuesday night for the past 30 years I’ve walked back and forth on 11th Street going to and from choir rehearsal. I write about this walk in my book, and one of the things I describe is passing by 18 West 11th Street and watching the ever-changing costumes of the Paddington Bear in the window.

The building has an incredible history, which is beautifully told in a New York Times piece by a former neighbor here. But it’s probably best known as the site of a Weatherman bomb factory and an accidental explosion in the basement on March 6, 1970. The building was completely destroyed and the building that replaced it was bought by David and Norma Langworthy in 1978. The Langworthys are the ones who put up the bear. From the Times piece:

“Its costume is changed according to the weather. On rainy days, Paddington wears a raincoat. During a storm, he switches to snow wear. For the first day of school, he is decked out in his schoolboy outfit. By special request, one day two bears appeared in the window dressed as a bride and groom; on cue, a neighborhood doctor fell to his knees on the sidewalk and proposed to his girlfriend.”

David died in 1994, and Norma died on January 28th. I never met either of them, but I’ve taken a lot of pleasure in the ever-faifthful presence of this bear, and it breaks my heart to think that this is the last time we will ever see him. Thank you David and Norma Langworthy for such a sweet contribution to the life of New York City and our wonderful West Village. I hope you both had fantastic lives. You made mine better. 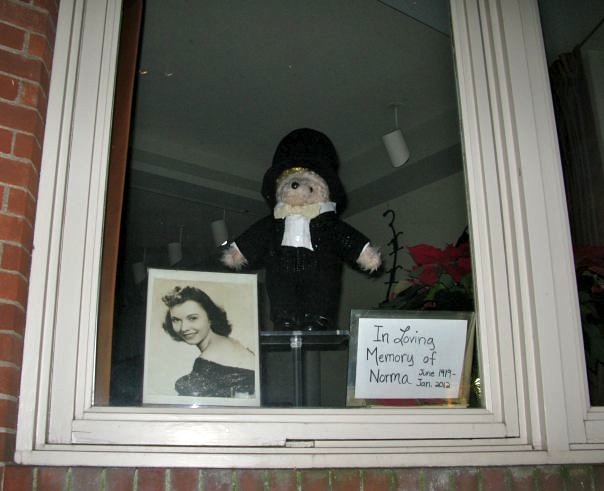 I Don’t Do So Well With the Scorching

Ventriloquists are Not Necessarily Tedious