One day, a few years ago, I was checking my mail and I looked down and noticed some old mail that had fallen behind the radiator underneath the bank of mailboxes for my building. I reached back and grabbed them. The first thing was a September 4, 1991 postcard about an event at a club called Speakeasy at 107 McDougal Street, NYC (now gone). It was addressed to Karl Rahnberg and although I lived here in 1991 I have no memory of Karl. Next up was another postcard and this one was mailed in 1959. It was for a Mrs. Rose Richter and it advertised a summer sale at “footsaver 34th St.” Rose is gone and so is footsaver.

The last thing was the oldest of all. It was an envelope with a 3 cent stamp and a Flushing postmark dated December 20, 1952, 4pm. Fifty-plus winters of steam had obliterated the name and address of the recipient, but the pre-printed label with the sender’s name was mostly intact:

I still have it and the label has since crumbled, in fact the whole thing is in much worse shape, but you could still read the full name when I first found it. (More below …) 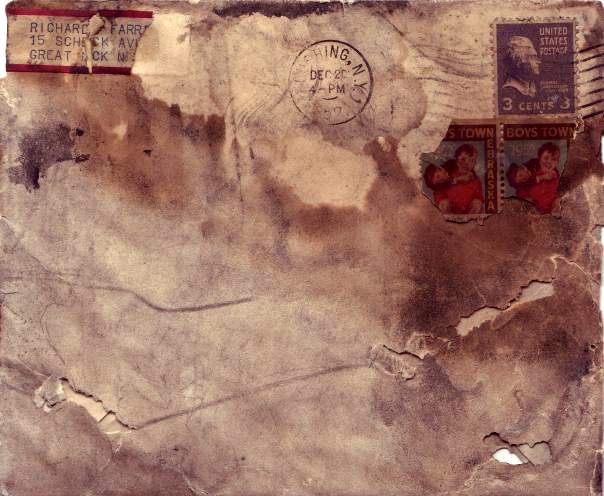 Think about that. That envelope was sitting back there for more than five decades. Year after year after year as it sat there the mailman came and went, the tenants came and went, some of them moving out, some of them getting sick and dying, some had children who grew up here, racing by these mailboxes on their way to school, who then left to have children of their own. All the while this overlooked piece of mail sat back there, undelivered, for half a century, getting older and more fragile, as the sender and recipient themselves grew older and more frail, until the possibility that it would ever finish its journey from Richard Farrelly to whoever was most likely over, because both people are unfortunately but probably dead. 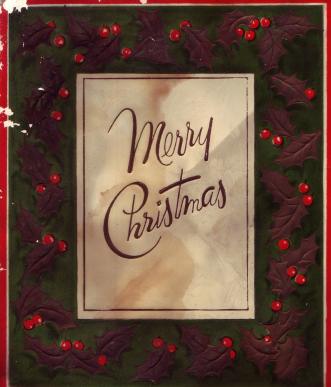 It was a Christmas card. The greeting read:

“To wish you happiness on Christmas and through the coming year.” Farrelly wrote “Sincerely, Dick” at the end.

Not a lot of warmth or effort there, but Dick was a man of the 1950’s, and this was not the most expressive decade for men. Who was he? Who never got his card? What if it would have been their only Christmas card that year? What if it was to Peter Tessa?  I wrote about Peter Tessa in my book Waiting For My Cats to Die. Peter Tessa lived alone in my building for many years.  Twenty years ago he died in his apartment one floor below me and no one noticed until the smell reached the halls days later.  He was 83.

I will never ever forget walking by the next day, and the door to his apartment was wide open and the place looked ransacked.  I walked in and saw a very old high school yearbook on the floor.  I opened it up and found Peter Tessa. Underneath his picture there was all sorts of predictions for him.  I don’t remember what, just the kind of happy, wonderful things high school kids predicted for each other (not dying alone, unnoticed for days).  I sat there for the longest time staring at his high school picture. I also found a framed picture which seemed to indicate that he did have a family at one point. 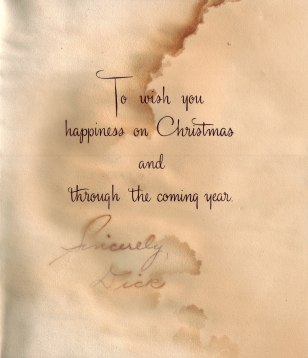 Anyway, I looked for Richard Farrelly, the sender of the 1952 Christmas card. For the next few days I made phone calls, checked libraries, went online. But I never found Richard Farrelly.

I’ve talked about this before, but I have always loved finding things like this, these traces of forgotten people, and then recovering their history. I used to go to used bookstores (when there were TONS of them in the city) and I’d shake out the oldest looking books for the cards or letters that would sometimes fall out. Those were the books I’d buy.

I had to make myself stop looking for Richard Farrelly. Actually, now that I think about it, it’s been more than a few years and I know a lot more about tracking people down, and there’s also a lot more resources online for searching. Maybe I could find him now.

Sigh. If only I could find someone willing to pay me to do stuff like this, like tracking down the forgotten senders of 50 year old Christmas cards. I need a day job! (A nice morbid day job … with health insurance.)