Because Buddy is in such bad shape, instead of going for something really heavy duty right now, the oncologist started Buddy on a stronger form of the same chemo he’s already on. If he does well, we’ll move up to a more powerful drug.

I should start seeing results in three days. Because it’s a similar chemo it might not do anything. If it doesn’t then that’s that, because the oncologist doesn’t think he can tolerate anything else at this point. The oncologist also wanted to hospitalize Buddy for two days to give him iv fluids, and I passed on that and will instead give him sub-q fluids at home. It’s not ideal, but hospitalizing him was another level of misery I couldn’t heap on Buddy and the doctor said he couldn’t guarantee it would make much of a difference. Buddy also needs a lot of meds and he has to eat whether he wants to or not, but I can manage all of that.

I’m glad I’m doing this. I still feel sick and stressed, but I also have just a slight feeling of being at peace, from making sure I’m doing what I can without going overboard and causing him more distress. So far nothing I’m doing is overly hard on him, except for the vet trip, which is not horrible.

A nice young man feeding birds across the street from The Kills book signing yesterday. 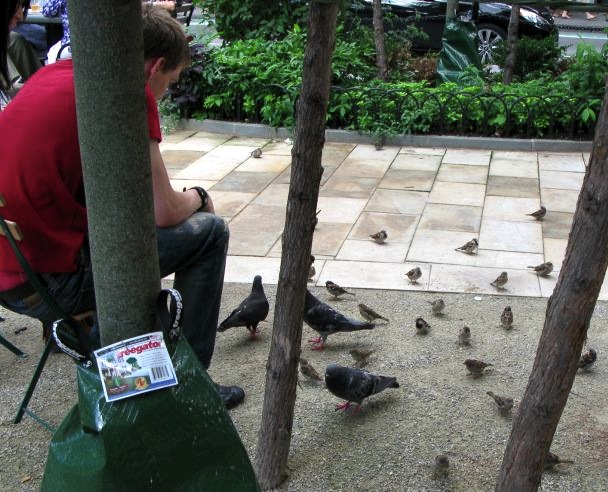 Democrats vs Republicans — It’s the Hatfields vs the McCoys