I just read an interview with Michael Grunwald, the author of The New New Deal, a book about the history of the American Recovery and Reinvestment Act (aka the Stimulus bill) and in it I learned about what Grunwald calls the Silent Green Revolution and this new government agency, ARPA-E. Why don’t I know about this already? From the article:

“After receiving an unprecedented surge in funding for renewable energy courtesy of the American Recovery and Reinvestment Act, Chu set to work hiring big names from the nation’s top research laboratories, in order to staff a new agency called ARPA-E, modeled after DARPA, the R&D wing of the Pentagon. In just three years, ARPA-E has made more than 180 investments in basic research projects in renewable energy, and that’s in addition to grants issued by the Department of Energy proper, like the one that funded the Ocean Power Technologies project in Oregon …

“The argument is that everything you think you know about the stimulus is wrong. It was not a pathetic failure. It helped prevent a second depression and end a brutal recession in the short term; it was a huge down payment on Obama’s campaign promises to transform the U.S. economy for the long term. But clean energy was the real outlier, getting $90 billion when the U.S. had been spending just a few billion a year. There were unprecedented investments in wind, solar, and other renewables; energy efficiency in every imaginable form; a smarter grid; cleaner coal; advanced biofuels; electric vehicles; the factories to build all that green stuff in the U.S., and yes, clean energy research.”

A young drummer who was playing the car, the street, the sidewalk, everything he could find. 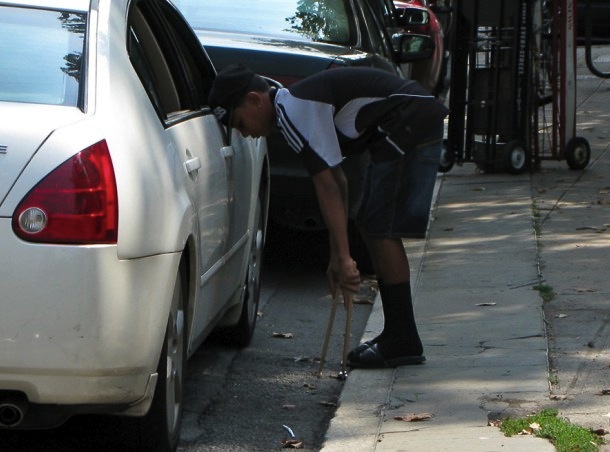 It’s Very Festive Out There