Well, that was horrible. What is the point of debates? For me they are agonizing, even when my guy is doing well. I hate them. I hate them like I hate watching pundits go at each other on news shows, or what passes for news shows these days. I would never make a decision based on them, and can’t imagine many people do. I liked when Obama said, “Governor Romney, when it comes to his own party during the course of this campaign, has not displayed that willingness to say no to some of the more extreme parts of his party.”

But for the most part, I didn’t listen. I couldn’t listen. I watched the reactions on Echo and Twitter and Talking Points Memo. I had to be once removed from it all in order to withstand the anxiety.

Can’t we just do away with debates?? If tradition is the only reason we have for doing them then we have no reason at all. Along those lines, can’t we do away with the process of collecting blurbs about your book for the back cover? Does anyone make a decision about buying books based on the blurbs on the back cover?

Just in case anyone is not aware, this is where those blurbs come from: the author, editor, and agent go around and beg friends, they beg friends of friends, and call in favors, they also write complete strangers, basically saying whatever they can to get people to write something nice about the book. It doesn’t mean the nice things people write are lies, the point is, it’s no fun to ask busy people to drop what they’re doing to read your book and write about it. Everyone I know always has a stack of books they want to read, a stack that they need to read, and I know what it’s like to have to read a book when have your own pressing reasons to get to a ton of other books first.

In new cat news, Bleeck continues to take over. Finney still doesn’t like him, but I adore him. He has tremendous personality and intelligence. Within seconds he filled up this entire apartment with who he is and his Bleeck-ish ways, I’ll bet he could fill up the planet.

But I have to make this right with Finney somehow, and I’m not sure what to do. Maybe once a day put Bleeck in the bedroom for a half an hour and spend that time loving on Finney, giving him catnips and treats? 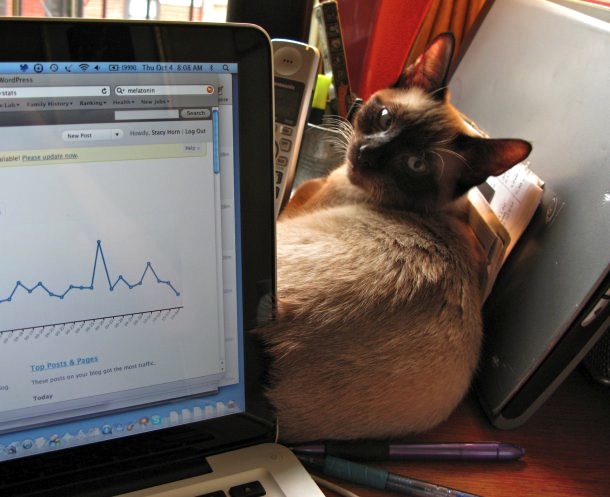 I Need Help From Crafty People

I am Sick With Grief that Jim Parsons Didn’t Win