It was similar in some ways to my experience working for the 2010 U.S. Census. A large group of people of varying skills and abilities were thrown together for a very short time to perform a big, important, and complex job. Most of us were strangers to each other, we had to figure out on the fly who could do what and then just go.

I got there at 5am, and I was immediately told to set up the ballot scanner. This is a very serious task. To avoid fraud and mistakes there was a lot of breaking of seals, recording seal numbers, checking initial ballot counts, making sure there were no ballots already in the ballot box, etc.

No sooner was that done when I was told to sit at a desk and start checking registered voters and handing out ballots. I looked out and there was already a long line of impatient people who wanted to vote and get to work. I didn’t know what to do. I was trained, but that was a month ago and I didn’t remember a damn thing. It’s not rocket science, but I drew a complete blank. Within seconds I had a still growing line of polite but stressed-out people who were looking at me like, what is wrong with you?? Give me my freaking ballot!! But, but, there’s a procedure. If only I could remember what it was.

I don’t know how I pulled it together, but I did. I made a few mistakes, but nothing critical, and they were the kind I could easily fix in the first lull (thank you, Joe). I loved it. It was insane, but I loved it. And that was because people feel so passionate about voting. Many were anxious for one reason or another, and later angry, which I will explain, but they were there to do something they really wanted to do and I was helping them do it. It felt great.

Here’s why people got angry. Because so many people had been displaced due to Hurricane Sandy, Governor Cuomo said any registered voter could vote at any poll site. This was absolutely the right call. But each poll site has only the list of registered voters for that district. So people voting outside their district had to vote using a special ballot called an affidavit ballot. These ballots will be checked later, and, if the person is a registered voter, counted. The problem was, a lot people were just voting wherever it was the most convenient for them when they wanted to vote.

From around 8 to 9 we had a small group of determined voters who were angry at us, angry at Cuomo, and angry at the universe. I didn’t blame them at all, and most of them managed their anger well. However, one guy spent that hour getting everyone’s name, the names of every election official the poor coordinator at the site could remember, all so he could write congress. And say what? How dare you have a hurricane that knocked out the power for a half a million or more people, so that they had to vote outside their district and the polling sites didn’t have enough special ballots to accommodate them? Trucks with affidavit ballots were frantically trying to move through NYC traffic to I don’t know how many poll sites, but that effort was doomed (I think they got to our site at 11).

Still, it was an absolutely marvelous experience. One woman had a problem with her ballot and she came over and put it down in front of us in such a way that everyone could see who she voted for, and her vote was for Romney. She saw what she had done and said, “Oh I don’t care, you liberals …” and I wish I could remember what she said, because it was the kind of teasing I love, funny, true, but not unkind. The guy next to me didn’t miss a beat. He immediately started joking right back in the same vein about conservatives and it was a wonderful moment.

The only downside to the experience was we were isolated from the election. We weren’t allowed to talk about it the whole day because our conversations might influence voters.  We also weren’t allowed to have a radio to listen to the news. I didn’t know until after midnight how the election was going. When the polls closed, I knew Obama had won in our district, but knowing he would win in New York was no surprise.  How was he doing out there??

Whenever I went out to charge up my computer I brought a power strip with me. That’s my power strip sitting on top of my backpack at a Starbucks. I did this so other people could share whatever outlet I managed to find. I wish I had thought of this generous gesture myself, but I got the idea from my neighbor Beth, who clearly is a nicer person than I am! 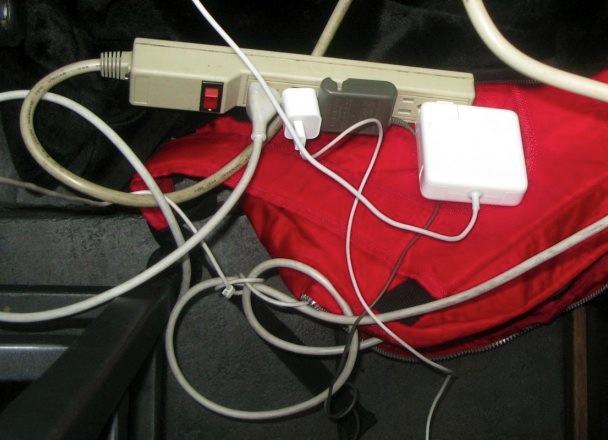 Why I Don’t Have A Car

Why can’t he be mine?

Music So Beautiful it Hurts