Even the universe has a better voice than I do! In my book I wrote about how astronomy professor Dr. Mark Whittle converted the first 400,000 years of the Cosmic Microwave Background into notes from a standard octave of a even-tempered scale (what we’re used to hearing) and raised the pitch 50 octaves (to put it in range of the human ear).

To hear the result go to this web page, look over on the left and click on “The First 100 Million Years,” scroll down, and then choose either audio only or run movie. I’m kidding about my voice vs the universe’s. The first song ever heard is not particularly musical or pretty, but it’s harmonic.

I thought about having a larger section about the cosmic chorus, just because it seems like there is no place in all the universe without music. Even black holes sing. They emit sound, one note, a B flat, although 57 octaves below middle C. And every star has its own song, which tells us about its size, brightness, what its made of, and how old it is.

Here’s a NASA recording I came across of the earth singing. By the way, the NASA website is so much fun to explore. Just type in “sounds” in the search box and listen to a few.

I found this photograph titled “A Negro Choral Society” in the New York Public Library’s Digital Gallery. It’s dated 1922, and the source is listed as, “The Negro in Chicago; a study of race relations and a race riot, by the Chicago Commission on Race Relations.” 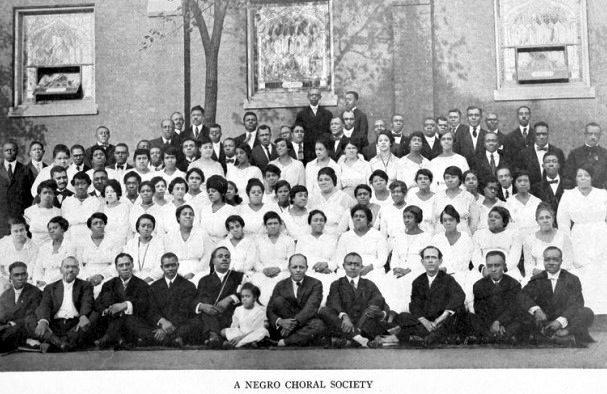 From Slavery to Poverty

Canada, We’re Thinking of You