I wrote about Baby Hope on my blog for my cold case book, but I wanted to also mention her here. This is a cold case from 1991 that is now on its way to being solved. I still remember the crime scene photos, they were so awful. Crime scene photos were part of the reason I decided I didn’t want to write about crime anymore. Here’s the section about Baby Hope from my book. You can tell from my description here how freaked out I was about the pictures.

On July 23, 1991, a little girl was found in a 40 quart, dark blue Igloo cooler off the Henry Hudson Parkway in northern Manhattan … Someone folded her in half, wrapped a cord from a venetian blind around her neck and behind her knees, and put her in a plastic bag underneath an cheap black tablecloth, and a bunch of red Coke cans.

Crime scene pictures show a naked little girl, hog-tied and badly decomposed, her tiny hands peeking out from between her legs. Her skin is black, brown and pink and bone is exposed all over. One eye is gone, and the other bulges like a horribly constructed toy. For the roughly four and a half years of her life, someone barely managed to feed her. She was a little over three feet high and weighed 20 pounds. They beat her. They sexually abused her. Finally, they suffocated her. There was almost no forensic evidence of the killers, no fingerprints, and no DNA. She was never identified, and her case was never solved. The detectives nicknamed her Baby Hope. For two years she was stored in the morgue, but that was more than the detectives could bear. They pooled their money, paid for her funeral, and buried her at St. Raymond’s Cemetery in the Bronx in a plot donated by the Catholic Archdiocese.

Her mother was just identified and now that Baby Hope has been identified (not publicly) the real investigation can begin. Detectives can start talking to her family and people who knew her. I’d like to know why her mother never reported her missing.

Update: Baby Hope was Anjelica Castillo. She was born in Elmhurst Hospital Center in Queens in 1987, so she was 4 years old when she died. Her cousin Conrado Juarez, 52, sexually abused her and killed her. Juarez’s sister, Balvina Juarez- Ramirez helped him dump Anjelica’s body. He’s been arrested, Balvina is deceased.

This is a picture of Jerry Giorgio, the lead detective, in 1993, the year they buried Baby Hope. I talked to him for my book and I remember him telling me about that dress. He said her remains were in such bad shape they couldn’t actually put her in the dress, so they laid it on top of her. 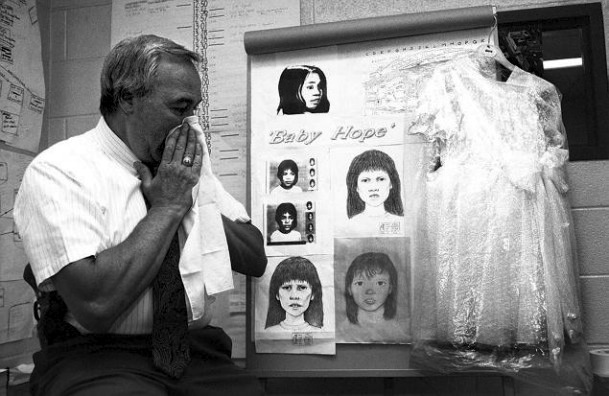 Here is Jerry Giorgio today, at Baby Hope’s grave. He’s 79 now (the picture is from the New York Times, photographer is Michael Wilson). 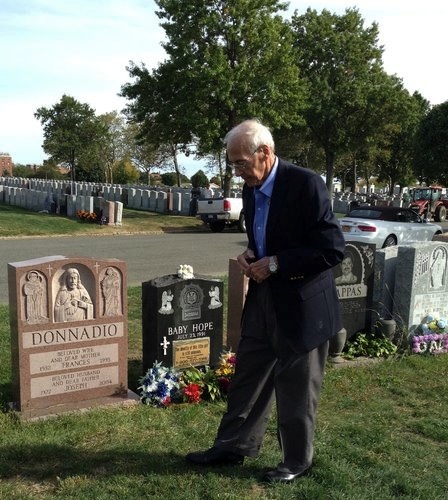