A week or so ago someone tweeted a New Yorker article written by Alex Ross called The Interstellar Contract. Alex Ross writes about music and the title had the word interstellar in it. Who could resist?

I wish I had known about this piece when I was writing Imperfect Harmony! Because I wrote about astronomer Mark Whittle, who did something similar. “Using maps of the Cosmic Microwave Background radiation and computer programs that can map the path of those waves, astronomy professor Dr. Mark Whittle was able to analyze the historical record of that early expansion, and what he found was a sequence of notes.” To hear the result go to this web page, look over on the left and click on “The First 100 Million Years,” scroll down, and then choose either audio only or run movie.

Spiegel was first! (Although what she did is different, but still! The music of the cosmos!) Ross’s article has a link to an excerpt from Kepler’s Harmony of the Worlds and I implore you to go listen. However, the LP The Expanding Universe, which contains the entire piece and others, has also been reissued, so you can follow that link and listen to the whole thing, and buy it!. (More about The Expanding Universe in the New Yorker.) The Ross article is so worth reading though, and Spiegel’s comments are poignant and moving. And I love the Beethoven piece at the end.

It turns out Spiegel and I met way back when I was first starting Echo. But we became reacquainted a couple of years ago when I rescued a few pigeons and was contemplating writing a book about bird rescue. Spiegel is heavily involved with animal rights and bird and other wild animal rescue. She showed me a site she was working on about ferals and I’m going to email her to ask her if I can link to it here (it was a work in progress at the time) but here is her main site. She also told me about an large installation she’d done around the time she started the feral site. “It was 3 wall-sized projection screens showing sequences of over 3000 photos of pigeons I had taken and 8 channels of audio of the sounds of the birds.” I wish I could have seen and heard that! Sounds breathtaking.

I took this picture on my way back from one of my favorite places in New York, the Municipal Archives. I love the old and new architecture contrast. 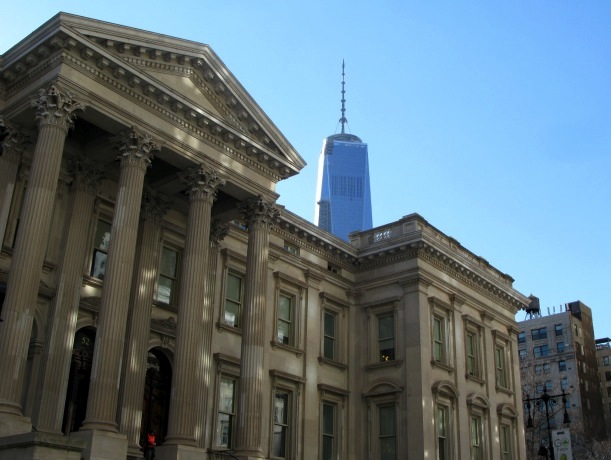 How Not to Write a Novel

Apparently I don’t know what day it is!