I walked around my neighborhood to see how the Triangle Shirtwaist Fire Anniversary was being commemorated. Here are pictures I took in 2011, the 100th anniversary, when the crowds were huge. It’s quieter this year. Normally you’d see chalk tributes like this one in front of the homes of every victim. Maybe they just haven’t gotten around to all of them yet, but I didn’t find a chalk tribute to all the victims in my neighborhood. 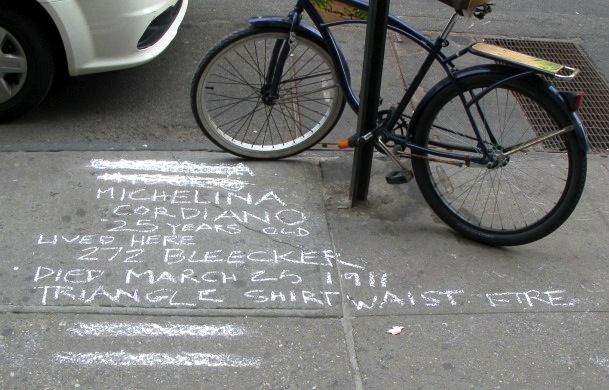 This is the actual building, with flowers out front. Someone always lays out flowers, with the name of a victim on each one. Note the tiny group of people. 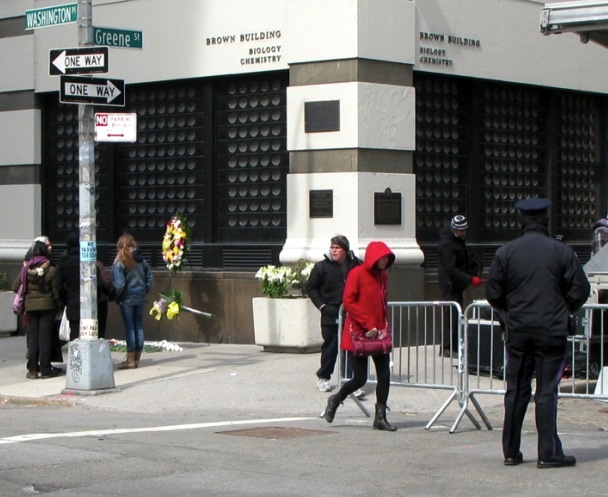 I looked down and immediate found Gaetana Midolo, who lived the closest to me. She was only 16 years old, and she’d come to the U.S. from Italy when she was 14. Imagine moving to another country, so excited because of all the wonderful things you’ve learned about your new home, this paradise, and then you end up working at a sweatshop, which ultimately murders you.

There’s some confusion about where she lived. It says 143 Commerce Street on her death certificate, and that’s what most people go with, but that’s an error. There wasn’t a 143 Commerce Street in 1911. I found references to Commerce Street being longer than it now is, but according to 19th century maps it had already been shortened by the time Gaetana lived there. She couldn’t have lived at #143. Actually, I just found a 1794 map and it was the same length even back then. AND, I just found photographic proof, except I’m going to post that another day. I want to go back and shoot the same spot and do a “then and now” view.

I suspect she lived at 14 Commerce Street and some tired, harried, possibly distraught city employee inadvertently added an extra number to her death certificate. In any case, poor Gaetana was unlucky enough to have lived in a world where an employer can cause the death of over 100 children and young women and not a damn thing happens to them. This is why we need government to impose regulations. Oh God, I could go on, about how these girls picketed their conditions, saying they were dangerous and inhumane, and how New Yorkers spat on them, the NYPD roughed them up, and the courts threw them in jail. A year later, 146 of them died in this fire. 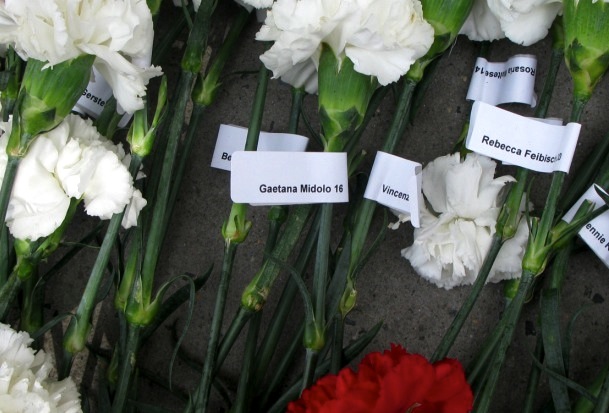 Being Poor is a LOT of Work