Someone put all these bouquets around the WWI statue in Abingdon Square. This is a tiny park near where I live, although I just read that in the early 20th century 4,000 people would regularly come to this park to hear concerts. I don’t know how they managed that. Seriously, it’s the tiniest patch of green.

From the Parks & Rec. website about the statue: “The monument was a gift of the Jefferson Democratic Club, whose headquarters once stood opposite this statue on the site now occupied by the residential high rise at 299 West 12th Street.” Philip Martiny is the sculptor and it was dedicated in 1921.

I looked closer and saw that all the flowers were artificial. This made me a little sad, but maybe the person who did it doesn’t like the idea of cutting live flowers. Or, maybe artificial flowers are less expensive and this allowed them to do it in the first place. Perhaps they laid flowers like this at every war memorial in the City.

This park is also where the Adrienne Shelley Memorial Garden is located. She lived and worked in a building along the park. I just looked her up the other day. I wanted to know how her daughter was doing (very well as far as I could tell). 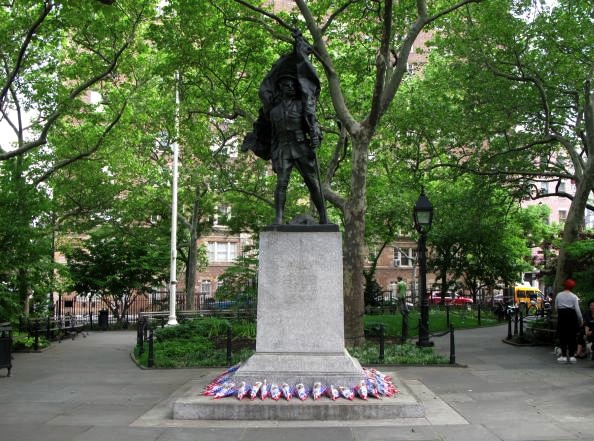 My Interview on Talking Hart Island

Finding out Who Lived in Your Building