I wasn’t quick enough to get the hug that followed the run-up below, but there were a lot of hugs on Tuesday night, our first rehearsal of the new season. It’s good to be back. Choir singers all over the world are in a good mood these days, as they get back to rehearsing. In many ways it’s the best part. Here’s a great Robert Shaw quote about rehearsals.

“The wonderful thing about the amateur chorus,” the conductor Robert Shaw once said, “is that nobody can buy its attendance at rehearsals, or the sweat, eyestrain and fatigue that go along with the glow; and nobody but the most purposive and creative of music minds—from Bach in both directions—can invite and sustain its devotion.”

While researching my book, I was looking into the Mendelssohn Glee Club, and all-male group that was founded in 1866 and is still singing today. I was going through their early membership lists just to see who popped up, and I found some hand-written notes about how on April 15, 1912, Frederic K. Seward, a Glee Club member who’d been on board the Titanic, still managed to make it to rehearsal a week later! Not only was that no surprise to me, I could see how he might have needed that rehearsal more than ever.

Along the same lines, I found a poem presented to Frank Damrosch (a conductor and singing teacher) from his students. It described the cold, unfriendly world outside, and the hall in the basement where they held their classes, with gas jets that were often leaking, and pillars that blocked their view, but, “Those hours shaped again and again, Your life, your very soul, In ways you’d not comprehend … You took the blue from out the skies, And sparkles from the stars, And bound them, In Heaven’s grandest harmonies.” Imagine having that effect on a bunch of people.

One more! From Ralph Vaughan Williams. “If we want to find the groundwork of our English culture we must look below the surface … to the village choral societies whose members trudge miles through rain and snow to work steadily for a concert or competition in some ghastly parish room with a cracked piano and a smelly oil lamp where one week there is no tenor because at best there are only two, and one has a cold and the other being the village doctor is always called out at the critical moment; and there they sit setting their teeth so as to wrench the heart out of this mysterious piece of music which they are starting to learn …” 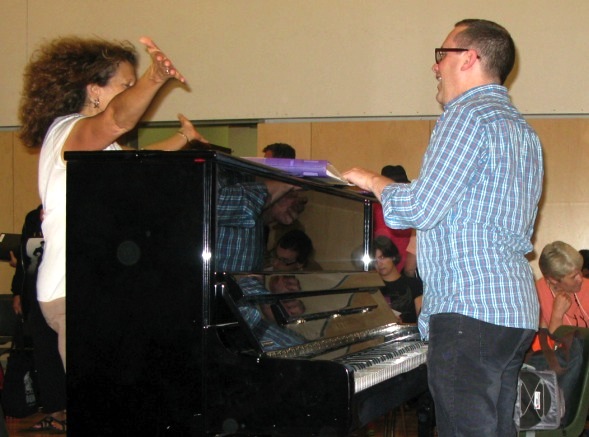 Census Duty Down at the World Financial Center

My Camera is Broken. Again.