The Municipal Archives, one of my favorite places in the world to explore, holds historical records of New York City going all the way back to the 17th century. I’ve been digging around in there for decades and I thought from time to time I might post snippets of items I found that are particularly compelling. Like this evidence of a 1863 murder, proving—in case there’s anyone who wasn’t already aware—that lynching was not confined to the southern states (although in this case the man might have died before he was strung up). This took place a couple of blocks from where Macy’s now stands.

“I yesterday saw the body of the above described col’ed [colored] man hanging to a tree in 32 St. bet. 6 & 7 Ave. I think he was dead when I first saw him. I understood a fireman who had him shot … this man who made this statement is a [illegible] with 3 Hose Co and a tall man, and I also understood that he had him shot by a negro, and then, this negro was attack, killed, & hung as stated.” Taken July 16, 1863, Mickail Mitch.

—From the records of the Coroner and Office of Chief Medical Examiner, 1823-1946, NYC County Coroner Inquests, Roll 90.

Students of history will realize that this man was murdered during the terrible draft riots that erupted in New York City after congress passed laws to draft men into the Civil War.

The Municipal Archives also maintains an ever-growing online gallery of images. The one below is from the NYPD & Criminal Prosecution collection, which contains some pretty horrific images. This one is relatively tame. The caption reads: “Homicide 92? Nov. 23, 1915 JMR “Isabella Bradford (Black)” kitchen interior.” A quick Google search turns up the fact that an Allen Bradford was charged (I’m guessing he was her husband). I’ll see if I can find out if he was convicted, I can’t access the inmate records on Ancestry.com at the moment. 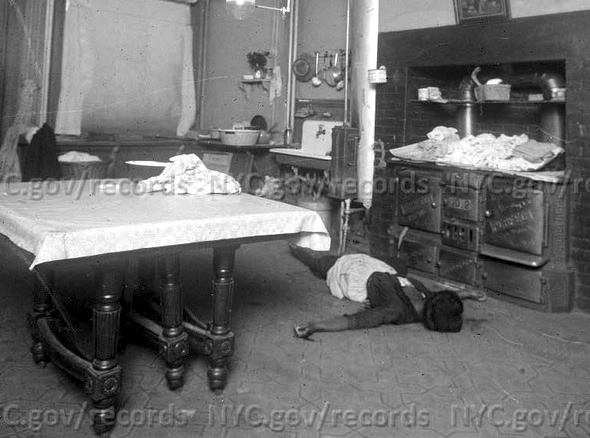 A Cat Belly and ME on TV!

2 thoughts on “Records from The Municipal Archives”