Four days after Thomas Aikens was beaten up and his eye gouged out, (see the previous post) Samuel Edmund Laurie was beaten by Patrolman Zakutinski, [Shield #18396, Precinct 32] and as a result of this beating, died in Harlem Hospital less than an hour later.

A memo was sent to the Police Commissioner with several recommendations to address the conduct of patrolmen assigned to Harlem and to ease the tensions that had arisen between the community and the police. The Commissioner’s response is below.

Arthur Garfield Hays, who apparently headed up the Commission, was a very interesting person, by the way. He was a well known civil liberties lawyer who represented Sacco and Vanzetti. Google him!

Police Commissioner Lewis J. Valentine was known for fighting corruption within the police department. Unfortunately he was not at all sensitive to issues of racism and brutality. He would not concede that there was any problem whatsoever and not one suggestion was adopted. Reasonable ideas like a committee of five to seven Harlem residents to receive complaints from “colored people” in order to avoid retaliation were rejected.

In reply to your communication of September 25th, permit me to advise you that …

I, as Police Commissioner, believe that the recommendation to appoint a committee of five to seven Harlem citizens, to receive complaints from colored people, to be unnecessary and impracticable. This department draws no line as to race, color or creed, and every complaint regardless of its source, whether the writer is anonymous or identifiable, against citizens or members of our Department for alleged misconduct, is thoroughly investigated and appropriate action is always taken …

Our municipal radio station, during business hours, could be used in any grave emergency, but most of the private stations while in operation are under contract with advertisers broadcasting commercial programs. Even though it were possible to obtain the cooperation of our large broadcasting companies … the idea appears to me to be impracticable because of the impossibility of addressing those responsible for the disorder and others in the immediate area …

In connection with the last paragraph of your letter, please be advised that each of the cases contained therein have been thoroughly investigated by appropriate officials of this Department and no cause for disciplinary action was found …

In connection with the death of Edward Laurie, on March 23, 1935, Assistant District Attorney Price presented this case to the New York County Grand Jury and the exonerated Patrolman Abraham Zabutinsky, 32nd Precinct. [I started to look into this case, and this may not have been a case of police brutality, but a genuine accident.]

In the alleged assault upon Thomas Aiken by Patrolman David Egan, 32nd Precinct, the facts in this case were presented to the New York County Grand Jury … and no indictment was found against either the prisoner or against Patrolman Egan … [two other cases were addressed]

Assuring you of my desire to cooperate, and with warmest regards …

Looking up at a building. The zoom lens captures what was too far away for my eyes to see. 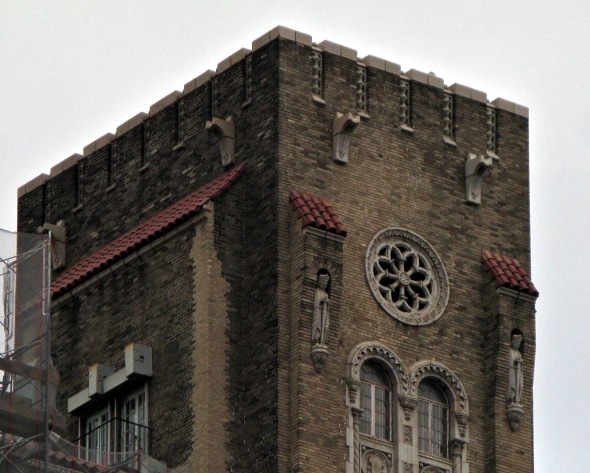