I heard on the news last night that another prisoner in the van with Freddie Gray said that Freddie Gray was crashing around inside the van, intentionally trying to hurt himself. Very weird, but okay, maybe he was out of his mind due to mental health issues or drugs. We need the truth, whatever it turns out to be. But then I read this morning that the other prisoner didn’t actually see this happen, he was in another part of the van that was blocked by some sort of divider and he only heard the crashing. He had no way of knowing what was really happening.

Why then are journalists giving this any credence at all? Why are they treating this like breaking news? I should say tv journalists, I don’t yet know how the print journalists are treating this information. Also, a Baltimore Police captain announced that no report would be given tomorrow. Why is this piece of information suddenly available and no other? You often hear journalists bemoan the fact that people reporting via tweets and other sources are slowly replacing professional news sources. This is a serious problem, they say, because these people don’t have their professional standards when imparting information. Perhaps in an effort to compete they are relaxing their standards as well. Again, at this point I am only talking about some tv journalists, and sadly, CNN is among them. (I say sadly because years ago CNN was a serious news organization.)

I followed the Millions March last night for a little while. Apparently it got quite violent, with police throwing people to the ground, including a journalist from Gothamist, and so marchers split off into different groups. I followed the one that ended up in Times Square, except I left before they got there. This was the scene at Union Square where the protest began. 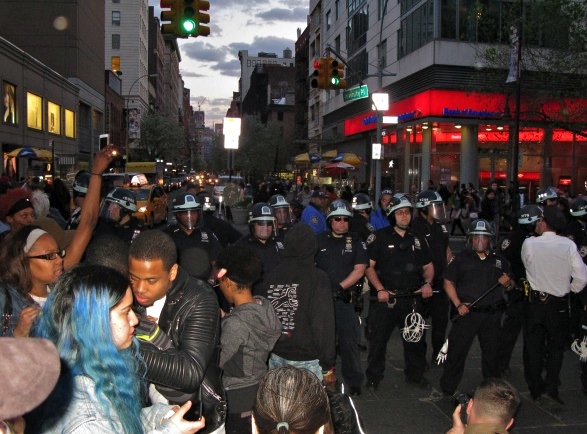