I’m still floating on a “I lead a charmed life” vibe. In part because I have such great friends. One had an extra ticket and took me to the play Hand to God last night, which was hysterical, but dark, my favorite combination. Thank you so much!!

Then there are all the few free things coming up that I plan to do. Weirdly, even though New York is one of the most insanely expensive places to live, it’s also one of the best places to be poor, as long as you’ve found a place to live, I should say, which is the hardest part of course. But after that you can find free or low cost health care, free hair cuts and color, and so on. (Notice the two things I mention, before wrapping it up with “so on.”)

First up, on June 9th, is the yearly Museum Mile Festival. All the museums along upper 5th Avenue, which include many of the best in the world, are free between 6 and 9.

Next, there’s this thing at Union Square on the 13th at 6pm called the Bubble Battle. A bunch of people are going to show up and blow bubbles. Come on! Can’t miss that. Should be beautiful.

Then there’s the yearly Make Music New York festival on June 21st. I’ve participated in this festival some years, and made music of one sort or another, and I’m contemplating doing so again. The one I might join is titled Bach and Sons. Like it says, we’ll be singing the music of J.S. Bach and his sons J.C., C.P.E. and W.F. It’s open to anyone, by the way, as are many other performances (which call for all sort of musicians). For a list look here.

On June 23rd I’ll be running around downtown participating in Night at the Museums. I did this last year, and had such a great time. (A few shots here.)

In short: June is going to be a fun month.

A couple of shots of dedications on Central Park benches. This one took my breath away. I remember having a few of those dawn to dusk, I-could-have-danced-all-night talks myself. The story behind this first one is told here. 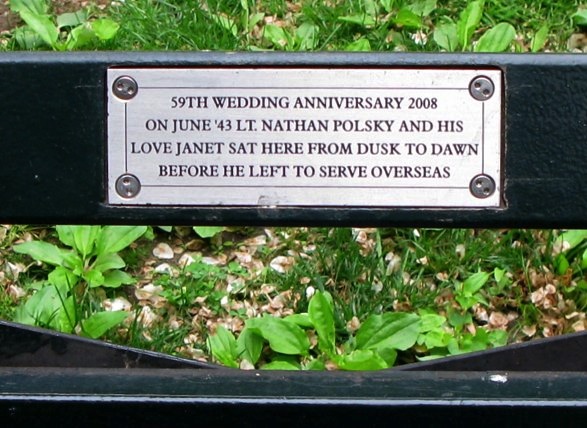 Short and sweet, but how many of us have someone like this who will think of us every day when we are gone? So poignant. Says it all. 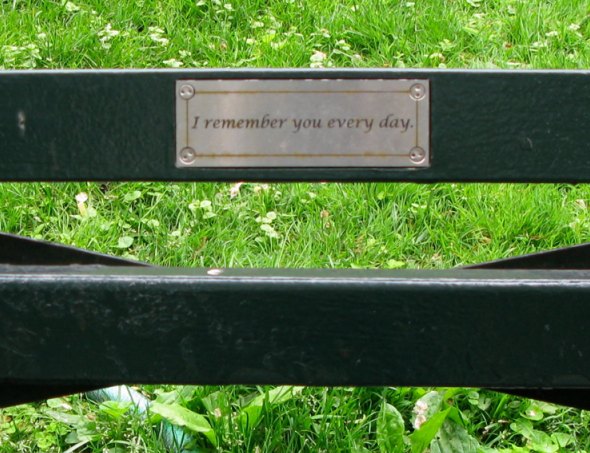