You had plenty of time to prepare, and 11 hours to make your case as to why we should be mad at Hillary, and you had absolutely nothing. It was also clear that this wasn’t about mistakes she and others made in Benghazi because little or none of your questions were aimed at learning anything about what actually happened, or what we’ve learned since then, or anything about who did this and their plans or motives, and what we can do in the future. It is my understanding that the review board made 29 recommendations regarding mistakes that were made, or how areas in the State Department that were poorly run, and Hillary accepted and implemented every one of them.

Your hearing, in contrast, was an ugly, transparent partisan fishing expedition that failed to achieve your goal, which had nothing to do with Benghazi and all to do with bringing down Hillary. As you now know you achieved exactly the opposite, and helped raise Hillary in anyone’s eyes that aren’t as blinded as your own.

I kept thinking this the entire time watching the hearings, as did many other people:

“Putting aside the political impact, however, this was truly an embarrassing day — not just for the GOP and Congress, but for the country as a whole. Consider, for example, that guns kill more than 30,000 Americans every year. Hundreds of communities have been shattered by mass shootings that happen practically on a daily basis in America. And yet the House of Representatives, which has held 21 hearings on Benghazi, hasn’t held a single hearing on gun violence since it took control of the body in 2010. A clearer example of Congress’s misplaced priorities is difficult to imagine.” Michael A. Cohen, Boston Globe.

Redemption is available to everyone. You want to turn this around? Immediately put together a truly bi-partisan committee to look at gun violence. Immediately repeal all the legislation you’ve put in place that prevents government agencies from researching and studying gun violence and instead, give them money to research and study gun violence.

You do this and people will respect you again. Yes, not the radical right wing conservatives, but they are not going to win you elections.

I don’t know if you’ll believe me (and who am I kidding, you’re not reading this anyway) but no one watching yesterday’s hearing believed any of you cared deeply about the lives that were lost. If you did, that was completely lost in your actions. But do what I suggest, which would be an extremely courageous move, facing down the extremists in your party, that would make people stand and cheer.

A view of World Trade Center 1 from 7th Avenue in the West Village. There was a lovely lavender tinge to the light, and I’m not sure if this shot captured it. 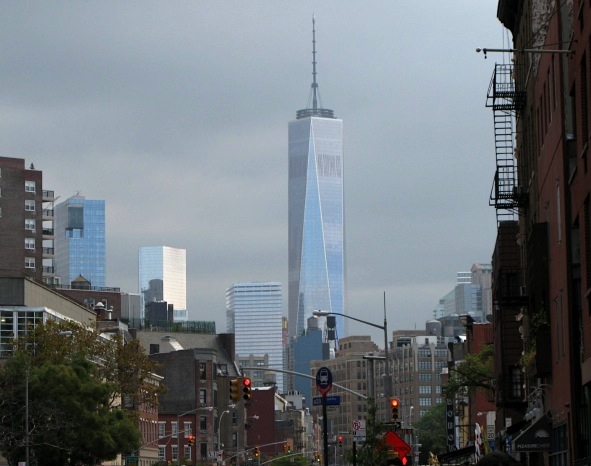 Back From Census Duty

I need another day off.