On February 23, 2016 I participated in a show on WYPR titled: 50 Years of Choral Arts. From their website: “A retrospective look and listen as Choral Arts gets ready for its 50th Anniversary Concert (March 20, 2016). Tom talks to chorus members and special guests who have played an important role in the story of Baltimore Choral Arts, as well as Stacy Horn ….”

Choral Arts Classics is hosted by Tom Hall, who also hosts Maryland Morning on WYPR Radio. In addition to being a well known radio personality, and an Emmy award winner, Tom is the Music Director of the Baltimore Choral Arts Society.

If you like you can listen to the show I was on here.

They’ve got some great shows coming up as well. This one speaks to me the most.

May 3, 2016 9:00 pm
Quest for Peace: On April 26, 2015, one day after the large protest against the death of Freddie Gray while in police custody, and one day before the violence that erupted after Mr. Gray’s funeral, Choral Arts presented a concert entitled Quest for Peace. We’ll hear music from that concert by the Baltic composers Arvo Pärt and Peteris Vasks, and Tom welcomes Chic Dambach, a peace-builder who has worked to end conflict around the world to talk about music’s special role in peace building.

My brother Douglas has always been a generous supporter of my choir, the Choral Society of Grace Church, and that’s him in the audience at one of our concerts. Oh God, so many people have demon eyes in this photograph! 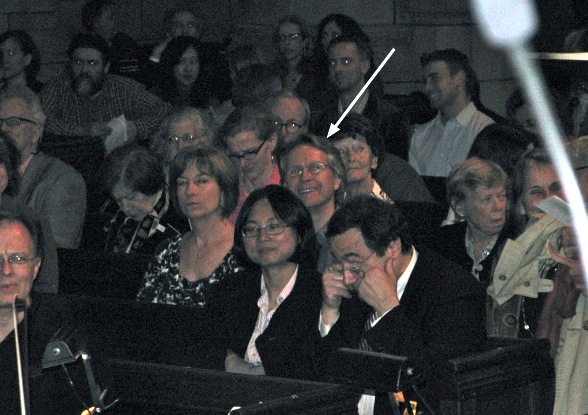