I wish I had gotten an earlier appointment. I’m taking Finney for a consultation with a surgeon and I got a call saying don’t feed him after midnight (because he’s a gremlin) in case they need to perform surgery. It’s not very likely, I’m still leaning away from surgery, and I don’t see it happening right there and then. They have to do more tests, and then I want to discuss it with his regular vet. But who knows? So, now I’m sitting here with two hungry cats, waiting for the time when I can leave.

About the debate. I watched. I didn’t think Trump did as bad as last time, or that Hillary did as well, which was upsetting. But on the plus side, I don’t think last night will effect the election much. Some pundits are saying “he staunched the bleeding of his campaign,” but I don’t think he did as well as that. I think he will continue to fall, or bleed, just not at such a steep rate.

I took pictures of my apartment for insurance purposes. My shelves tell my whole life story. All the cat medications, my choir music, swimming trophies, the books I’ve read, and so on. 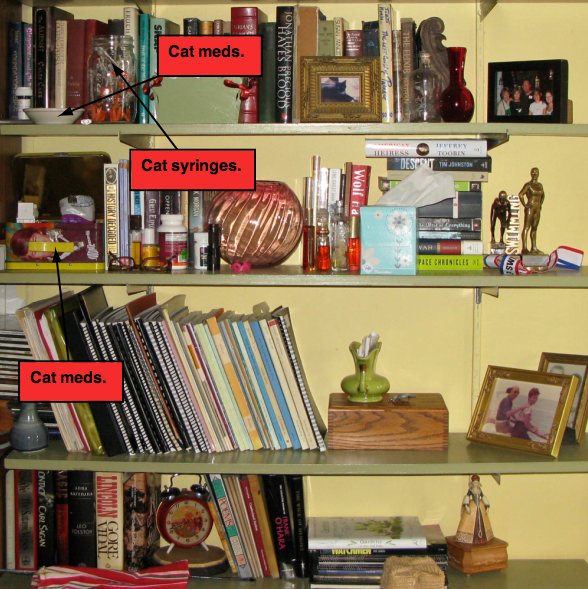 I Wanna Be Sedated by Stacy Horn

Going Back to Duke Tomorrow