So, I’ve been researching the creation of a “mental institution” called the Central Islip State Hospital. It was built to house the overflow from the lunatic asylum on Blackwell’s Island and for people who are not regular followers of my blog, I’m writing a book about Blackwell’s Island.

I’m working on the history of the hospital when it occurred to me, my grandmother Daisy was committed there and she died there just a few weeks later! I’d forgotten. I wrote about her in my book Waiting For My Cats to Die. I’d originally thought she died at Pilgrim State Hospital, but I’ve since discovered it was at Central Islip. From my book:

Daisy never married again because she was a strict Catholic and the Catholics don’t recognize divorce. She fell in love one more time but the Church wouldn’t give her an annulment. She lived alone with my mother for the rest of her life, working at one low-paying job after another until July 13, 1951, a month before she died, when she was admitted to [Central Islip State Hospital] on Long Island with the diagnosis of involutional psychosis, depressed type. She was “hallucinating, withdrawn and mildly assaultive,” her records state. “Mildly assaultive,” my friend Matt translates for me, means she didn’t want to be there and she struggled. I’m glad to hear she fought back but also sad because it means she was scared and wanted to go home.

Her records said she “was a cardiac as a child and had to stay in bed. She was away from school for three years but graduated at an early age.” Daisy was smart! Sadly, she died 24 days after being admitted, on August 6th. She was only 47, and my poor mother was only 16. My mother went to live with her father, and he died a year later! (My mother never really got over these deaths, which is not unusual.) Daisy’s diagnosis at death: Dementia praexox, paranoid type. Cause of death: Coronary thrombosis. This is Daisy on her wedding day. 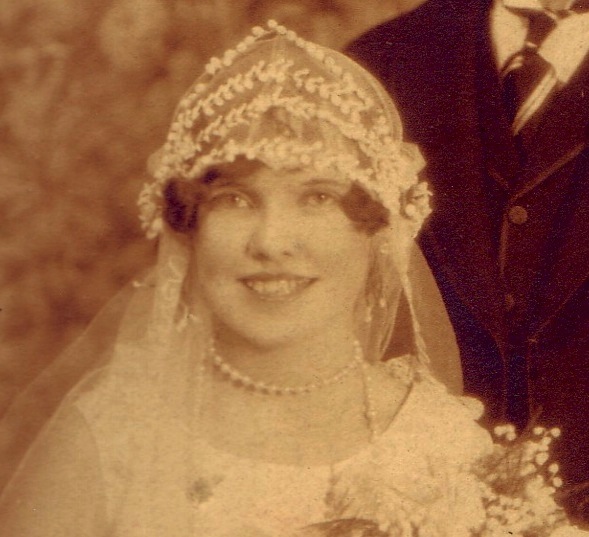 Spring, yay! But I miss snow.