This chapter was originally supposed to be the beginning of my book Damnation Island, but my publisher thought it was too grim. Full disclosure, it is grim. The two people executed were young, and the woman, like most women who ended up executed at the time, was African American.

Quick backstory: Shortly after buying Blackwell’s Island in order to build humane institutions for the poor, sick and criminal, the City of New York scheduled a double hanging.

Everyone wanted to avoid the gridlock conditions that choked the City that crisp spring day in 1824, when roughly a third of the entire population of Manhattan crammed into Peter Stuyvesant’s farm at Second Avenue and 13th Street. Even those who would have described themselves as good, or charitable, swarmed the field to see John Johnson hang. Johnson knew what he was in for. It could take him up to twenty minutes to die, and he was only too aware that he was likely going to feel every second of it. The doctor he’d begged for something to ease his suffering had been pitiless, refusing to provide any form of medicinal comfort. The last thing Johnson saw before his four foot drop into eternity, with clear eyes and nothing to mute the terror or the pain, was the “solid mass of living flesh—men, women and children, of all colors and descriptions” who’d come to watch.

Afterwards, Stuyvesant demanded compensation for the damages to his property. The following year, only five days before sitting down to Thanksgiving dinner with their families, the masses came together again. Once more a wave of humanity surged towards the sight of one man violently squirming as the weight of his own body was used against him, and not even the 7th Regiment of the New York Militia, who’d been called in to preserve order, could quiet the viewing frenzy.

To read the whole chapter you can download a pdf: Blackwell’s Island Hanging

A lighthouse was later built on the site of the hanging. 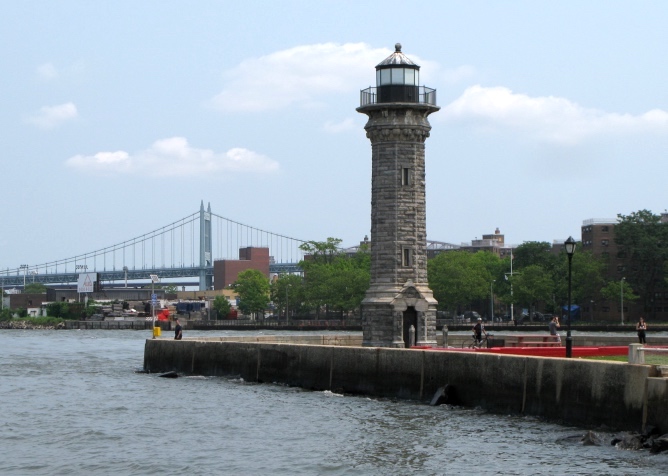 Why oh why can’t this dream come true?