Update: Richard’s brother Tom sent me photographs, and I added some of them to the original post about Richard here.

I went to the Theatre on Film and Tape Archive at the New York Public Library for the Performing Arts to watch Richard Sale’s performance in The Danube. Unfortunately, it was on video tape which had deteriorated badly. You couldn’t really make out the actor’s faces, and the sound was so bad I couldn’t hear most of it. Towards the end there were a few, brief close-up scenes where I could see and hear him a teeny bit better. But I can’t tell you anything about him based on what little I could see. He was young. He was in good shape.

I think if I was someone who loved him I’d want to go to the library and watch it, if only for the scenes when you can make out his voice. Hearing the sound of someone’s voice, after they are gone, it can be more powerful and affecting than a photograph.

Here is the 1984 Frank Rich review of The Danube in the New York Times. He was not a fan, but his problem was with the play and the director, not the actors.

Hunting around on Ancestry.com I learned that Richard was born in Texas in 1952, graduated from Denton High School in 1970, and he went to the University of Michigan. He acted a bit, then he died here, in New York, on August 29, 1985. So he was only 33. And he was living in my neighborhood at the time. I have to find out where. I’ve been in this neighborhood since … 1981 or 1982. Maybe we were neighbors.

Richard (Rick to his high school friends) also won third prize in a poetry contest when he was 18. His obituary, which appeared in the Victoria Advocate on September 4, 1985, follows. 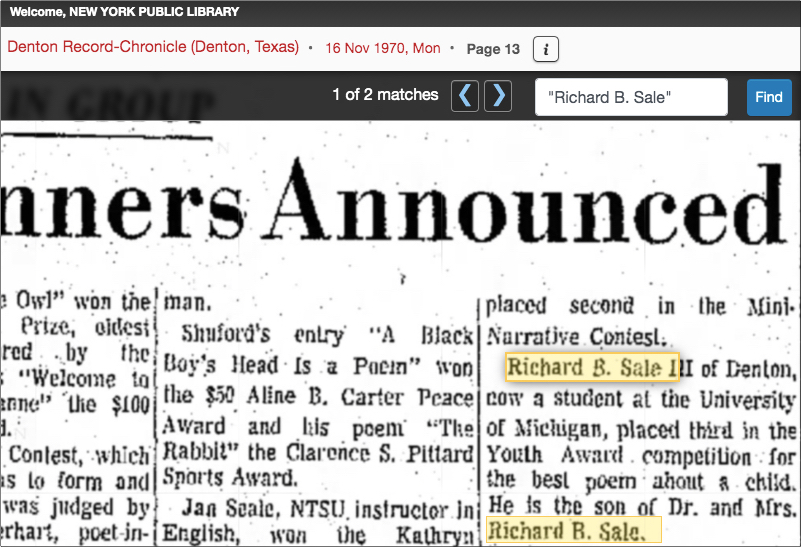 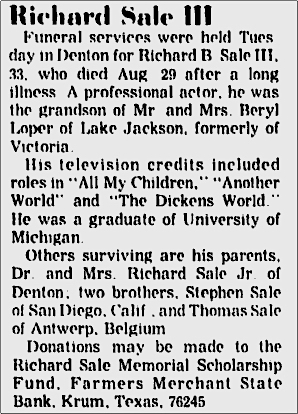 My Sex and the City Neighborhood

Finney in the Window!