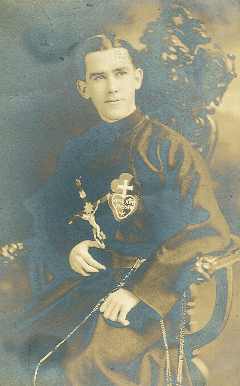 Meet my Uncle Charlie, AKA Father Aloysius Boyle. (I get mixed up about what he was to me. A great great uncle or something?) Among other things, he served as a pastor of Our Lady of the Isle Church, Shelter Island, New York, St. Mary’s Parish, Dunkirk, and St. Joseph’s Parish, Baltimore, Maryland. He was also Vicar of St. Mary’s Retreat, Dunkirk.

He died as the Rector of Holy Cross Preparatory College where he was elected after the 1926 Provincial Chapter. They tried to revive his health in Baltimore to no avail as he had cancer. (My cousin Debbie got all of the above, including the picture, from the church archives.)

I found so many sad stories while researching by family history. Another Boyle died in a fire, six months after his wife died following an operation. Some said it was from smoking in bed, and that he had been drinking. Lots of alcoholics in my family. We’re Irish. I found two people who had been committed, and there were many early deaths for the women — the genealogy program I use says that women in my family only live to 58 years old, on average.

See the movie Get Out!