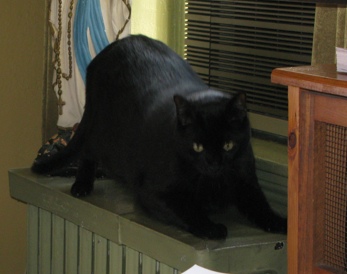 Right? This is the pose you see in a million Halloween black cat representations.

I am feeling lazy beyond belief today. I don’t even feel like drumming in the parade, but I’m afraid not to. Aly’s dying has me in “seize the day” fear. Live while you can and so forth.  Am I having the time of life?  Which doesn’t allow for sitting at home watching scary movies on tv, it seems.

Oh!  Here are the latest instructions from Project Bueller.  These are the people who are going to re-create the parade scene from Ferris Bueller’s Day Off at the parade.  Once again, this sounds like it will be the funnest thing EVER:

When and where to show up?

If you want to be an audience agent, we recommend you arriving early to get a good spot. This means 6:00 if you are near the beginning (Spring and 6th Ave) and 8:00 if you are near the end (21st and 6th Ave). Where you and your friends decide to station yourselves is up to you. (Do what you feel like doing!!Except jumping the police barricades, don’t do that, instead show up early and march with us. See below!)

The TV Crews are stationed at 10th and 6th Ave and even though we’ll be repeating the routine throughout the path, we’re really going to rock the shit out of this block in particular. You should probably stake out good spots there as early as 6pm.

If you want to be part of the float crew, (this is open to the Beer Maid Brigade, the Stair Dancers, and anyone who feels like they have exceptionally captured the essence of a character from the film) Arrive between 6-6:30 pm at Broome and 6th Ave and find our float on 6th Ave between Broome and Spring – give the password “Ferris Bueller” and you will be let into the area.

After He Destroys My Desk …