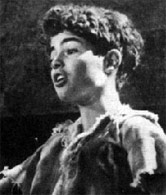 One of my favorite Christmas traditions is listening to the children’s opera Amahl and the Night Visitors. I’ve been playing it every year since I was 9 (mostly). I wondered what happened to Chet Allen, the boy who sang the part of Amahl. Well, I just read this story on a blog:

“Sad to relate, the 12-year-old American Boychoir soprano who first played Amahl never saw 50: Chet Allen committed suicide at 44 by taking five times the lethal dose of an anti-depressant medication he’d been hoarding. His fabulously sung, go-for-broke, eerily on-target performance as Amahl had got him into the 1952 movie Meet Me at the Fair with Dan Dailey and Diana Lynn. Then his voice, along with his life, changed: As a baritone, he stayed with the Columbus Boychoir until the 11th grade, then finished high school and never sang or acted again. In and out of psychiatric hospitals for years afterward, Allen held down a variety of jobs including a 10-year stint as a stockboy for a local store. At the screening, Menotti explained that Allen needed more care and attention than anyone could give him. The composer had visited him in Columbus and found a man-boy, still in the throes of Amahl, unable to get beyond that defining role.”

On IMDB someone added that Menotti [the composer of Amahl] would later say, “No one could have helped him enough.”

I looked at old New York Times stories about Allen. There’s one on December 13, 1951, announcing that he got the lead part. He must have been beside himself. Imagine having that kind of accomplishment at that age. Amahl aired live on NBC on Christmas Eve at 9:30PM. “The clarity and tone quality of his accomplished singing were secondary to his remarkable acting and facial expression,” the Times wrote the next day.

Chet Allen killed himself on June 17, 1984. Gian-Carlo Menotti is still alive at 95, by the way. I read something he wrote for the Times in 1971 about growing old. It’s very dark, and he rails unreservedly, “On approaching old age two ghosts must be abjured: disillusionment and bitterness. For the dreamer I once was, disillusionment is almost unavoidable. For the fighter I still am, the bitter taste of defeat, especially when defeat is considered unjust or treacherous, is apt to poison one’s heart …” It made me like him. He’s just so honest. And he talks about the small joys. And “the dignity of being needed.” His one true joy in life seems to be the Spoleto Festival, which he founded, and continues today. I see in Wikipedia that it says the festival was founded in 1977, which can’t be right. He’s talking about it in 1971, and refers to their programs for the past 14 years, making it sound like it’s been around since 1957. Weirdly, on the Spoleto website they say 1977, too! Oh wait, no, they say it began in Italy in 1958. Okay, all is right with the world again.

Bones, I love you but what am I going to do with you??

I won a free haircut last time, you could win too!