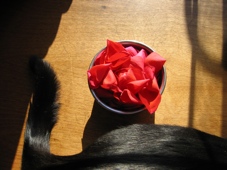 The roses crashed, and I didn’t have the heart to just throw them away so I put the petals in a bowl. I just realized that this picture, next to ones I took when I first got them, is like this sad cycle of life and death. Isn’t this bowl of petals urn-like?

Yesterday I had one of those days. One thing after another went wrong, among them, Echo’s web server crashing. I had to go down to where we have the server co-located to manually fsck (showing off one of the few unix commands I remember after all these years). I get there and can’t get the keyboard to work. I don’t know what to do. There’s a couple of guys working there on their servers so I go over and ask them if they have a keyboard I can borrow. One guy says “yes,” before I even finish asking the question. He finds a keyboard, brings it over and plugs it in for me, then he gives me a bunch of cables that will make my life easier in the future, tells me what they are for and how to use them, and finally he tells me to keep the keyboard. Because of him I was able to bring the web server that this blog runs on (among other things) back up.

I Broke My Wrist!

Ted Cruz Biggest Disservice Was to the Rest of the Country