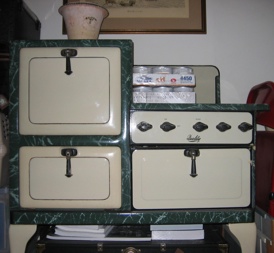 This oven came from the apartment next door to me, which had been empty for decades. The story goes, a young cop who was killed in the line of duty had lived there with his wife and baby daughter in the 50’s. When he was killed his wife took their baby and left and never came back, leaving the furniture and a lot of their possessions behind. They continued to pay rent, though, so the apartment stayed empty.

I moved in next door around 1981 or 1982, I forget. One night there was a radiator leak in the apartment and the super had to break in to fix it. I was home so I went inside with him. At least part of the story was true. It was like going back in time. There was old furniture there that had been sitting unused for decades. Wallpaper was peeling off the walls in great big chunks. A desk full of someone’s papers sat dusty and cobweb-y.

And there was also this stove, which I thought was beautiful. The super said I could have it and it now sits in my bedroom. This picture doesn’t do it justice, it really is a lovely thing.

Which was a long lead in to this website. Michael who reads this blog sent it to me. It’s called the Baby Boomer Death Counter. Good freaking lord. Prepare yourselves fellow boomers.

Someday someone else will have my beautiful stove. They will tell their own story about how they came to own it. Maybe they will talk about how they got it from the cat lady’s apartment on the top floor. (Except, technically, I am NOT a cat lady. Two cats do not count as “cat lady,” right??)

WAIT. Have I told the stove story before? Am I repeating myself?? Has it come to this?? (Forgive me.)

The Lower Lower East Side