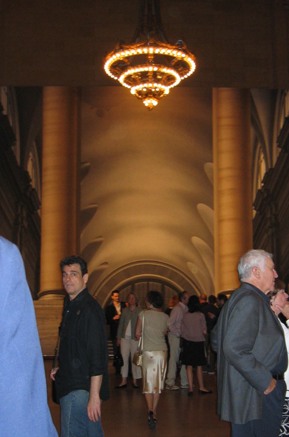 Last night there was a party at Grand Central for an exhibit based on the book Celluloid Skyline: New York and the Movies, that was written by a friend, James Sanders. The exhibit is co-sponsored by Turner Classic Movies and Time Warner Cable. Turner Classic Movies is also doing a month long New York movies film festival on TV. The host, Robert Osbourne was at the party and he said a few words. That was fun.

That’s actually a huge backdrop in the background of this shot. None of my shots came out really great, alas. (That’s Howard looking at the camera.)

Another friend there said that James called him and said, “This is my dream.” And I thought about that. Imagine you love New York and movies (and who doesn’t??) and you spend years writing this book about New York movies, and one day a big hall in the always stunning Grand Central Station is taken over to celebrate your book and what your book celebrates, and the TV is also celebrating it at the same time, and there’s this wonderful exhibit of films, and stills, and backdrops, it all comes together, and you made this happen.

It’s a nice dream, I thought.

When It Happens to You: A Novel in Stories by Molly Ringwald