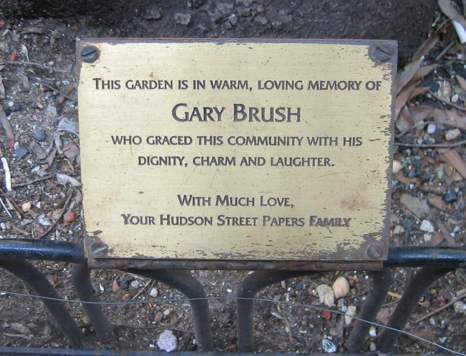 Notice how I notice all the sad things? I noticed this on Bleecker Street, just a few blocks from me. It’s sad for so many reasons:

1. Gary is dead.
2. I don’t know who he was and if you google him, he doesn’t come up.
3. Hudson Street Papers is long gone.
4. They call it a garden, but it’s a tiny patch of earth surrounding a tree, and while some people maintain these tiny, tiny patches of earth as gardens, no one is maintaing this one. There one was strewn with garbage.
5. The sign is starting to deteriorate.
6. We all must die.
7. And be forgotten.
8. And any signs of us will eventually deteriorate and disappear, too.

Hey, but at least he was loved when he was around and people cared enough to erect this sign. I was in the doctor’s office this morning, with a bunch of women, all of us waiting to have a “women’s” thing done, and I had a nice chat with a woman who was 93. Maybe we’ll all make it to 93!

Update: I got this email from a friend of Gary’s who gave me permission to post it. It makes me wish again that I had known Gary.

Came across your blog re Gary Brush garden memorial in NYC.

I was a great friend of Gary and his late partner Gary Nemkowich who was an ex of mine. I stayed in their apartment several times when in NY either performing with Bloolips or studying for my Doctorate in Musical Theatre. We played hard and shared some legendary Dynasty parties, memorable Hallowe’ens, long disco nights and so much love and laughter. Believe me, he would have been the first to appreciate the garden and yet also would share your more existential thoughts on our inevitable end. Thanks for noticing. I smiled so hard on seeing your blog and
my heart swelled with love and pride for his life. Thank you.

My Trip to Harvard