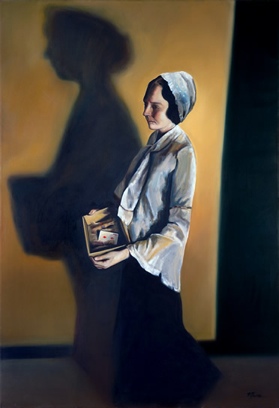 Yesterday I read about two local artists who committed suicide, Jeremy Blake and Theresa Duncan. I’d never heard of them before, but I read the article because I’m always curious about people who go voluntarily into something I do everything I can to avoid. There’s a post about them on Gothamist today, and so I was reading the comments section because I’m also curious about other people who are curious like myself.

One of the commentors posted that Theresa had a blog and that she had recently posted about an MK Ultra thing called Project Monarch, and maybe there’s a connection. MK Ultra was the name for a CIA program that did research in mind control. I looked up Project Monarch because when I looked into MK Ultra for my book I never came across even the name Project Monarch. But I didn’t research MK Ultra heavily, I mostly wanted to compare the work at the Duke Parapsychology Laboratory with the direction our government took into mind and consciousness research (hint: not at all the same). It wasn’t particularly meaningful that I never heard of it.

If you google Project Monarch what you mostly find are entries about a couple who wrote about Project Monarch, Cathy O’Brien and Mark Phillips. You have to google this stuff yourself, I don’t know how I could even begin to summarize, mind control, sex slaves, multiple personality disorder.

My immediate reaction is, I don’t know if there ever was a Project Monarch, I’m willing to believe that there was, and that they may have begun some of the experiments described. Our government has attempted some pretty nutty stuff over the years, and not with the noblest of aims, but I don’t know about these two at all. They say things like Hillary Clinton knows all about this, but takes it in stride as just your typical government stuff. Insane. Although J. B. Rhine did come up against this problem where clearly troubled people would tell their stories. They were completely delusional, they’d outright lie and exaggerate, but sometimes their stories began with one element of truth. Who knows.

So that brings me back to Theresa Duncan. I browsed her blog a little. The fact that she accepted Project Monarch without question is a little out there. Plus, she just killed herself. I wonder what Duncan and Blake’s friends and the professional community around them make of this? Blake was represented by a gallery and was in a few Whitney Biennials.

Theresa quoted Reynolds Price on her blog. “A need to tell and hear stories is essential to the species Homo sapiens–second in necessity apparently after nourishment and before love and shelter. Millions survive without love or home, almost none in silence …”

Sadly, I gotta strongly disagree with that. I think millions suffer in almost near silence. Lots of people have no audience for their stories, or keep quiet for a wide variety of reasons.

I was talking to Howard the other day, about the beginning of an idea for my next book. I don’t even quite remember it, something about wrongful death. People dying for causes that turn out to be nothing, or executed for crimes that they didn’t commit, I forget where I was going with it exactly, but I was inspired by a painter named Tina Mion. The painting above is one of hers. It will come back to me.