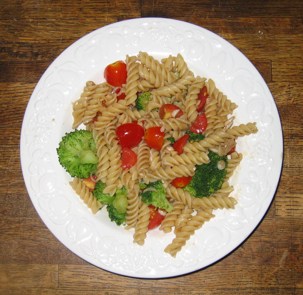 This was the second thing I learned to cook. I realize cooking is a relative term with meals like this, but it’s still a big deal to me. This was less of a success. Everything felt too much, too much vinegar, too much lemon. Weirdly, it was better as a leftover the next day.

Last week I basically spent an entire day at Mt. Sinai. They are tracking World Trade Center workers and volunteers and every year or so they call you in for a check-up. Each time they seem to focus on different things. This year the mental health type questions were much more extensive and were all about people’s attitudes about the extent of control they have or don’t have over their lives. I’m a do-er (an evil do-er) but I am actually happy about the fact that I have finally come to accept that I can do and do and do until the cows come home, but there’s a lot of things that are simply out of my control and acceptance is a key thing to peace and happiness. Then I come to this question:

Do you feel everything happens for a reason?

“I don’t believe in accidents,” says the host of The Oprah Winfrey Show. “I know for sure that everything in life happens to help us live.”

Give me a break. It’s like I was watching Big Brother the other day, and one of the players, Amber, prays to God to help her not be evicted from the show. Even for God-believers, I have to think this is a serious misuse of God-power. God should smite her for even attempting to inopportune him with something so trivial. But to bring it back to “everything happens for a reason,” she later says that God put her on the block (the Big Brother term for being nominated for eviction from the show) to make her stronger. The person who writes the recaps for Television Without Pity wrote, “God? It’s not working.”

There is a person in the world who actually thinks there is a omniscient being who not only put her on a reality TV show, he is now orchestrating her entire experience there.

Anyway, I’m tired of having other people’s beliefs imposed on me from every direction all the time, expecially the automatic assumption that I share them. Although Howard rightly points out that given how many people do share these beliefs, it’s a good assumption.

It’s about acceptance, but a different kind of acceptance. I’m facing facts, there are lots of other people in the world, and everyone has their own needs and wants and the world is not all within my control. People who believe in God go even further, they cede control. But I imagine they would describe it differently.

The end result is the same. We all still have to endure what we must endure. If they get through it, they thank God. If I get through it I thank whoever helped me and feel relieved that luck was on my side today.